I’m back in Croydon now, but had a fantastic final day in Cambridge. How better to spend an evening than Pan’s Labyrinth followed by an extravagant poker game? First off, the Guillermo del Toro helmed film is an adult fantasy masterpiece. Visually stunning, it finally shows that elaborate realistic CGI effects are no longer the domain of Hollywood/Japan alone. I knew the Spanish film was dark in tone, though I was unprepared for just how brutal some of the “real world” violence would be. This is not merely the Tim Burton brand of dark fantasy; it is definitely intended for adults alone. The dichotomy between the whimsy of Ofelia’s imagination and the all-too-real backdrop of fascist Spain is perfect for the film’s mood and intent, weaving the two together in the most powerful ending I have witnessed for some time. Hopefully a full review will appear soon, but in the meantime you must see this film. 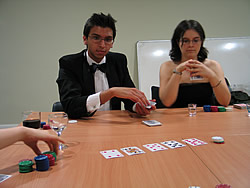 About a week ago, no doubt still soaring on a lingering Bond high, Ravi and I frivolously discussed the possibility of holding a poker game in black tie. At the time the situation seemed to merit it. One week later we found ourselves going ahead with it because, well, we hadn’t done anything suitably silly for far too long. Booking a T staircase supervision room for its large table, eleven of us (including Angie, Sparkie, Sonya, Irina, Andy and a certain Fellow) gathered to do battle. Where lack of money could not, the dress code lent suitable charge to the proceedings along with a variety of alcoholic beverages to taste. It also enabled the establishment of a new tradition when going “all in”, now to be accompanied by undoing one’s bow tie with a flourish (requiring, of course, that all participants wear real ones). Perhaps puerile and definitely one of those “only in Cambridge” flights of fancy, it was definitely worth it and provided and a perfect end to a pleasant term. 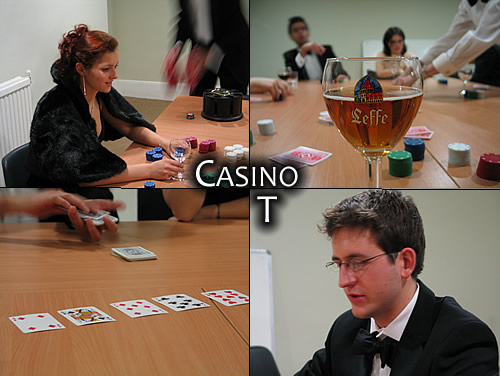 Shreena just blogged about a video in which the BBC Culture Show visits Whitby Gothic Weekend. It’s a slightly superficial insight into the Goth community (you’d need rather longer than 7 minutes) but is an interestingly open-minded exploration, with musings on the future of the culture and why after twenty years it has not already disappeared like so many others.