I have not been loitering on the threadcorners of the Downing forums of late, but was drawn back by plaintive cries that varied between “that’s odd” and “it’s all gone horribly wrong“. The latter may be a little sensationalist. Evidently a lot of work has gone in to the inevitable integration with the rest of the JCR site. Undoubtedly the move away from the popular phpBB system will reduce spam, but the heritage of the open source package was that its interface had been honed over several years with use by tens of thousands of people; even slight changes are likely to be a step backwards. Of most irritation will certainly be the new fixed width style which involves ridiculous amounts of scrolling on long threads as it uses less than half my screen. Teething problems are understandable, but one wonders whether its continued popularity is dependant largely on whether they are willing to invest the time required to accept various criticisms and re-implement several of the features removed in the migration.

Which is, incidentally, exactly the sort of pragmatic approach to change that we take at P-2006. The first calendar system, as I suspected, hasn’t met the stringent standards you have come expect — it’s gone. However, pre-empting this, I already had an alternative Gregorian idea in the works. Since it emerged that few would use it for navigation, this calendar is an entirely new feature for displaying events such as release dates for recommended films. Hovering over a date will reveal what’s going on, while clicking will give you more information and often a link to the appropriate site for further details. Let me know how you find it, what sort of things you’d like to see there and especially if you have events I can help publicise. Meanwhile the Archives are being rearranged since the month-by-month list, despite allowing fast access, was becoming too messy. The new Archives page will allow you to select an individual post by its title or view a whole month’s entries. You’ll also find the Links page is finally being fleshed out into a full set. Work is ongoing with all this so bear with us but the end result looks to be extra functionality with a cleaner menu. 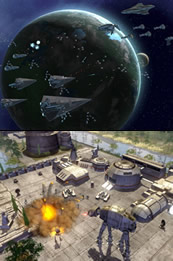 I’ve been impressed with the Empire at War demo. The Petroglyph team is composed largely of veteran developers from the C&C series and it shows. Although neither the ground nor the space battles feel particularly special in themselves, it is the integration of the two that makes the experience feel fresh and new. The creation of a persistent galaxy allows you to move surviving troops from one battle to invade another planet, or consolidate your defences elsewhere. There have been several attempts at RTS in the Star Wars universe before, but this is the first that fully encompasses that feeling of, well, actual star wars. And the chance to command some of the big screen heroes doesn’t hurt either. I’d just recommend that you grab a torrent instead of Gamespot’s painfully slow download servers.

Beauty and the Geek