Speak English! I don’t know the meaning of half those long words, and I don’t believe you do either!

I had been gradually cleaning out my hard drive with the intention of installing the Windows Vista beta (now on general release for “technology enthusiasts”). Progress was slowed because, with my CD collection boxed up, I have over 20gigs of music around which I had to work. Having eventually freed up the requisite space, I realised that its distribution across the hard drive meant I could not actually partition that amount without reinstalling XP too, at which point I realised this wasn’t really worth the hassle as Vista was unlikely to be stable enough to replace XP as my primary OS. It seemed a shame for that newly created space to go to waste. And then I remembered Linux.

I had been meaning to try it out for a while, and had even selected a flavour with the help of the Linux Distribution Chooser test. Basically the underlying architecture of the Linux kernal is fixed, but various groups produced their own distributions (or “distros”) which have a unique visual appearance and different bundled software. While many are free, there’s big money in marketing enterprise distros to businesses. 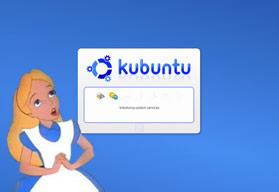 Kubuntu was recommended to me: it’s the Ubuntu distribution with the KDE look and several tweaks. The “Live CD” system allows you to try it out by running to directly off the CD. I am not exaggerating when I say it took me less than two minutes to make up my mind. Installation was scarily easy. In total it took about a quarter of the time to which I am used for a Windows format and installation. It even took care of the partitioning and dual booting without affecting XP at all. It even came with a full complement of generic drivers for all this laptop’s hardware. This was not the geek-orientated deathtrap I had come to expect.

Inside I swiftly discovered a sleek environment with a simplicity and stability that is very conducive to working in. I have heard similar things about OSX. With OpenOffice already included, I could dive straight in too, aside from swiftly installing Firefox to check out its internet capabilities. Accessing all my old files was a snap, once I mounted a directory that pointed to the XP partition. Although the latest Linux builds can write to NTFS (the XP file system) it is still experimental and not recommended. As such it was necessary to create a third partition using FAT32 to store files that I wanted both operating systems to be able to edit and save.

The end result is a second operating system that I now supports most of my non-gaming needs. In fact this very post was produced in Linux. Up to here it has all be eerily simple, devoid of the tech vocabulary and unintelligable gibberish we have been taught to fear. Over the next few days I shall continue to discuss some of my experiences as I venture further down this rabbit hole.