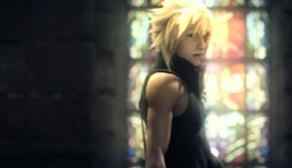 There are some rare moments that the phrase “OMFG” was designed for. Final Fantasy VII: Advent Children has several of them. You may be aware that the film recently leaked onto the net. Usually I would try to hold myself back and wait for the big screen experience but in this case it seems questionable whether we will even get a European theatrical release. Having been waiting literally years for this gem (and possibly forcing you to sit through several trailers), my strength faltered and I snapped up the hi-res DVD rip as swiftly as humanly possible. Bad, I know, but I’ll be buying the DVD and seeing it the cinema if it does emerge and so help me I just couldn’t handle all these delays. The subtitles we produced by fans who have already translated it into several languages: it’s a real labour of love for something they’re clearly passionate about.

The film itself is like a homage to the fans, giving them a chance to see some of their favourite characters rendered in truly stunning detail. Due to Square-Enix’s long-running partnership with Sony, I’ve had very little opportunity to play the FF games, but as that alliance seems to have ended with the next gen consoles, perhaps things will change. 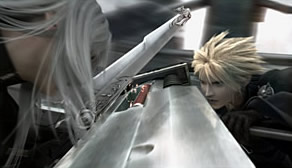 Although I knew very little about the preceding game, I was drawn in by 2000’s Final Fantasy: The Spirits Within, a film of unsurpassed realism in digital animation. What they achieved at a time before Monsters Inc. and the other Pixar big guns, is nothing short of phenomenal. While that was a standalone project, for Advent Children it does help to have a working knowledge of the FF7 universe, its storyline and characters, since this is basically a continuation, following Cloud two years after the game’s events.

On this outing they have opted for a less realistic look than the previous film, remaining truer to the anime style of the games. The story unfolds slowly in the first half and while always beautifully rendered, things often seem to drag between the few moments of blinding action. In fact, it’s the perfect build-up, because once all hell breaks loose in the city…OMFG!! Describing the visual acrobatics, the style, the immense, majestically sweeping fantasy of it all is impossible; this truly must be experienced and felt to be understood. Penny Arcade’s fanboy warning is damn right.

Please play fair: watch it now but make sure you buy/see it later.