While I have certainly not abandoned PC gaming, it is true that my focus has shifted to the Xbox 360. I will opt for the console iteration of most multiplatform titles (The Orange Box being a notable exception) not for achievement points, though this is an understandable draw for many, but simply because relaxing on the sofa while playing has become my preferred option. Also, until I buy a new monitor, games look far better on the 1080p Bravia even with the additional distance. A nice hi-res widescreen monitor might actually make a big difference to my gaming choice. Nevertheless the PC remains the breeding ground of quirky and indie titles since the platform is open, free of the cost of licensing and certification that plagues small console developers. I’ve recently acquired a few demos for smaller titles and in particular I wanted to discuss eXperiment 112 (or simply The Experiment depending on your region). 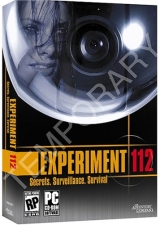 The story’s protagonist, Lea Nichols, awakes inside a ship that has been used for some kind of biological research, with little memory of what has happened. Not exactly the most original premise, you’ll be forgiven for interjecting. However the player has no direct control over her at all. Instead the player is inside a security booth and must guide her and help her survive using only the functions of the security terminal. This means we see her through rotating security cameras as she moves through the complex, we can open doors, use infra red or thermal vision, and interact with devices remotely. There is a decidedly voyeuristic tone to the proceedings,even once Lea knows we are watching. There is a strange intimacy in being able to see everything she does without actually being present. Direct communication is limited, mostly one way as she can speak to us, and using a camera to nod a response is a bizarre feeling.

Last night the whole family, including partners, went to Vrisaki in North London to gorge ourselves on a massive Greek-Cypriot meze meal. This was a belated celebration of my dad’s 50th birthday and Vrisaki is something of a family tradition for especially gluttonous occasions. It could be argued that several of the multitude of appetisers are merely fillers and it is advisable to tread carefully, opting only for the better ones to save room for the meatier dishes at the end. This is a restaurant that has benefited greatly from the smoking ban, since its cramped design easily filled unbearably with smoke, particularly since it is attached to (and one must enter through) a somewhat shabby kebab shop.