A Rambling Sort of Day 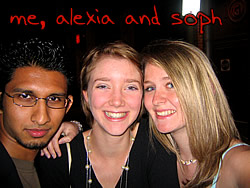 Sophie sent me some photos from the other night, so you can look at those while I ramble. Because it’s going to be one of those sorts of days. You know the ones: filled with tying up three dozen loose ends before going away for a while, like going on holiday only with rather more work waiting for you at the other end. The bright glimmer amidst this rather pale grey hue the sky has taken is that Chyde should be popping over for a drink later on, before we head off to our respective unis for several months.

I noticed the new FAQ doesn’t have a photograph of me, so I need to pick one shortly. I have faith that most of your suggestions will be thoroughly unhelpful, but if you do have a preference I’d like to hear it. I’ll probably take a new one at Downing so at least you’ll have a pretty backdrop to look at. 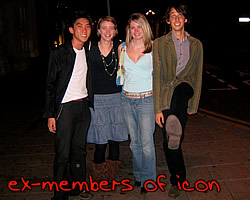 Passing on a request from Neil Gaiman’s editor, if you’re in the UK go buy your copy of Anansi Boys now. He’s dangerously close to the top ten, apparently. Meanwhile in the States he’s finally hit the coveted NYT #1 spot (for next week) so, despite being bitter that he’s visiting the other place and not Cambridge, it would be nice to show we have just as much taste here…

My most popular photo at morgueFile so far is the Gulf Shore Ship which I’d never have picked, but is why sharing is nice since it makes you look at your own work differently. Meanwhile another archive which shall remain nameless rejected my Fighting Fishbowl photo allegedly due to “poor lighting”, which I found amusing since it’s one of the most carefully lit photos I’ve done.

Having checked the schedule, Howl’s Moving Castle, A History of Violence and most importantly Night Watch are all showing at the Picture House shortly after we return so I suspect there will be several compulsory cinema trips.

Provided all this packing somehow gets done, next time I’ll be posting from my new room.

Destruction is the New Creation