A Night With The Opera

With Firefox‘s 1.5 release, many people were disgruntled to see that its coding was still somewhat bloated in comparison to its rival rebel browser, the long-established but now free Opera. Famed for its sprightly speed and light footprint (in non tech-speak that just means it chews up less of your computer’s memory) I finally decided to give it a go for comparison’s sake. 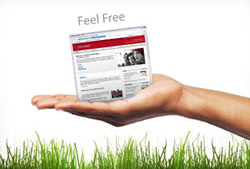 You will instantly notice that it certainly is damn fast. It takes very little time to adapt to its intelligently designed user interface which places things much where you’d expect (and want) them. I particularly liked the fact that unlike Firefox, it’s fullscreen browsing actually uses the entire screen, although with some sites (including this one) it seems to cause some major CSS issues. However, whilst it features power browsing features like mouse gestures, it falls far short of Firefox in terms of customisation. This is by design, of course, but it’s a significant drawback if that’s the sort of thing you’re in to. With the amount of time I spend online, I need to be able to browse exactly the way I want. The simplicity of Opera, combined with the same general advantages over Internet Explorer mean that I’d almost be tempted to recommend it to less advanced users ahead of Firefox. However, this does ignore a corollary drawback which is that Firefox’s customisability makes it a favourite amongst professionals and web designers, so chances are most websites are still not being tested in Opera. As such, I’d foresee continued compatibility issues for some time. That said, I think I’ll keep Opera installed so that at least P-2006 can aim to fully support it.

And it wouldn’t be a fully rounded browser article without a sneak peak at IE7 now, would it?