A Dire Shortage of Virgin’s Blood 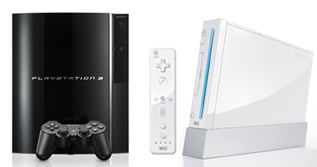 I’ve just become brother of the year after Gameplay confirmed that a pre-ordered Wii for my sister will be arriving on the day of launch (“Wii is yours!” being their somewhat dubious phrasing). Let’s just say I’m glad she wanted that and not one of the near mythical PS3 units that have resulted in several outbreaks of violence already. Particularly when people do this. I believe the current slow rate of production is now due to a shortage of virgin’s blood, needed to coat the lens of the blu-ray drive…

Speaking of violence on release, booking for Downing’s free Christmas Formal inevitably led to server suicide as 400 impatient students hit refresh in what would have been a perfect 10 in synchronised server slaughter, were it to become an Olympic sport. I fear they may have rules banning that level of performance-enhancing alliteration, however. The majority of the KLM crew (as Dave dubbed us) got through, but several will have to give it another go tomorrow. Whether the server will stand up to a second round of beating after being reinforced is anyone’s guess. I certainly would not want to be responsible for it right now.

For those who love Pandora as a method for discovering new music, Musicovery is a really nice visual representation of a similar concept. The user triggers the process by selecting a mood from a graph and can limit the genres if so wished. A visual array of lines is then produced with linked songs which are played in order. The user is free to navigate around to see and play similar songs in different genres. Definitely both unique and captivating to look around, particularly in genres one would not normally consider.

And for those who enjoy the fictitious boxart I occasionally produce, the latest speculates on the possible future direction of the Total War franchise.

Bat Out Of (Extraterrestrial) Hell