Everyone’s sites seem to be reaching landmarks. Neil, Jane and James are all taking a look back, so I thought I would engage in my own retrospective charting the murky waters before P-2006 was recognisable in its current form and before all but the most dedicated readers were, well, reading. So let us travel back to the late nineties where a not-quite-teenage boy sits in front of a keyboard…

Scant evidence remains of the first proper site I produced, Palace of the Phoenix. It quickly evolved from a simple hobby into a sprawling web covering a variety of interests from music to web design, but the bulk of the site was dedicated to my chief hobby at the time — Warhammer fantasy wargaming. Being a creative sort I particularly enjoyed designing new characters and crafting entire backstories for them. The site eventually became a useful resource for others with archives of fan-created content produced by people worldwide. The fate of the Palace is long since forgotten although I suspect it may have been the victim of a server crash since no files from that period still exist online or in my archives. 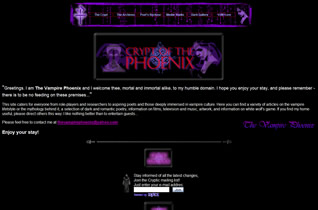 At the very end of 2000 I began work on Crypt of the Phoenix, a new site dedicated to a somewhat darker interest of mine — vampires. I was new to the subculture and found that putting together the site was a great way to learn more about it. It was very much a special interest site, but many friends frequented it as it became one of my chief expressive outlets in the form of a large library of (often rubbish) poetry. The site gradually morphed and found its footing as a resource for those with similar interests in the vampiric, from role-players to researchers to the more hardcore vampyre lifestylers.

By 2003 it had become a hub for all sorts of people, many of whom started to contribute material and make requests. In 2002 I was pleasantly surprised to see it pick up a couple of web awards and it went on to earn a cluster the following year. It also marked my initial experience at writing film reviews. Reviewing within a specific genre provided boundaries and comparisons that make it much easier than I was to find generic reviewing later on. The site went through 4 iterations during its lifespan, and its final logo featured a photo of Emma Liddel, a Wiccan friend, although the site itself was never intended to become a generic occult resource. 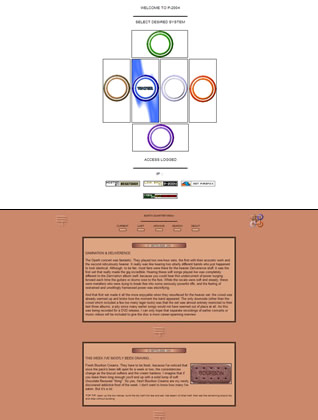 I always had great difficulty in finding hosts as I could not afford to pay for hosting, yet refused to have my visitors constantly bombarded with flashing ads and pop-ups. By this time finding reliable hosting was becoming problematic with the Crypt’s host, Brinkster, reverting on their ad-free promise. P-2004 existed on the beigetower servers from 2003, a free community-based hosting solution that was self-selective. Only if the community approved you, based on examples of your work, could you become a member. P-2004 coexisted with the Crypt for some time, though the latter gradually fell into disrepair as 2004 progressed. My focus shifted to the new site that I felt better encapsulated me, particularly the Earth section which housed what became the regular blog that you now read. Beigetower worked well for some time but eventually maintenance of the servers fell by the wayside and it became more difficult to get things done resulting in the eventual move to a paid host in 2005.

Despite obvious similarities in name and the four-section layout, P-2006 marked major changes from its predecessor P-2004. For the first time I was paying for hosting and I also purchased a domain for the site. Although I was still handcoding the site, I had switched to WordPress for the backend which made posting much easier and more pleasant to do.

Which brings us back to the present day. I am incredibly grateful to those who have stuck with me throughout much of the adventure, Sam C in particular who contributed writings to the Crypt and still reads here occasionally although he does not comment as often as he ought. Although major overhauls now traditionally seem to happen in Septembers, I don’t know how old this site as a more ethereal entity really is, but whatever its age and despite all it has been through, I am quite sure the future holds even more exciting developments.