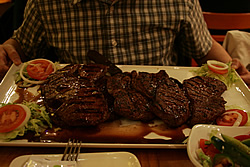 Phil decided that the best way to celebrate his birthday last weekend was attempting to consume 64oz of steak in under an hour. Naturally I couldn’t turn down entertainment like that, so headed over to Spur Steak & Grill at The O2. The photos tell the story (apparently they don’t have a problem with dSLRs in the restaurants) better than I can, but suffice to say it was a valiant attempt. Despite a strong opening 20 minutes, the pace gradually slowed and by the final third it was a real uphill struggle. Although dejected, it was nothing ice cream couldn’t cheer. And while he suggests his mass eating form may be on the decline, Phil still seems keen to have another go. His girlfriend Helena is not. To be honest I can’t really recommend Spur (I assume it’s short for spurious quality steak), but it was a fun night.

Nuit Blanche is a classy little black & white short flick with heavily layered digital effects. It earned Arev Manoukian Hollywood attention, and he recently discussed its creation (including a video showcasing the digital effects) with Wired. While it may be the slow motion shattering glass that draws the eye, Nuit Blanche perfectly captures the power of a fleeting connection with a stranger, when in that single gaze the rest of the world becomes momentarily irrelevant.