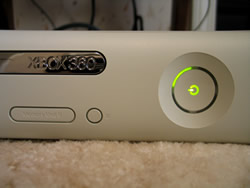 My cousin Caleb arrived back from uni yesterday bringing a rather nice surprise in tow. He somehow forgot to mention that he’d got his hands one of the elusive Xbox 360 premium consoles. That means wireless controllers, harddisk, the works. Since I have yet to find an RPG that he doesn’t like, I decided to introduce him to Guild Wars. Instantly hooked, that left me free to put the 360 through its paces. After several hours of gameplay, here are my first impressions.

Beyond the sleek white box to replace the black behemoth in your living room, the controller is similar to the second, smaller version Microsoft released for the Xbox, which was in my opinion the best console controller on the market. Although it still fits in your hands just as comfortably, there have been a few modifications. The trigger controllers are smaller, moving less. While this is great for shooters, I fear it will prove a drawback in driving games where the Xbox excelled due to the precision triggers offered in controlling speed. Gone too are the black and white buttons, replaced by shoulder buttons that seem a little too sensitive as they’re easy to accidentally press — especially since they’re often going to be controlling grenades! You’ll soon settle in to the wireless way of things with an easy interface that lets you pick up any controller to start the action, but I’m still looking for the wire every time I put the controller down at the end of a session. 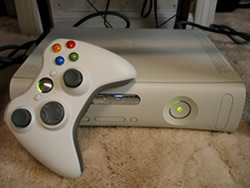 I’ve been playing Call of Duty 2 and Kameo. The graphics in both instantly show that this truly belongs to a new generation of consoles. The former is certainly a superior world war game, enough to excite me in a genre that doesn’t usually hold my attention. It features impressive teammate AI as they call for supressive fire and take cues from your use of smoke grenades. Kameo is sort of Zelda crossed with Pokemon, while visually closer to child-safe Conker, and it delivers the quality one would expect from Rare. The shapeshifting gameplay is incredibly fluid as you hunt down cute kidnapped elemental sprites, absorbing them to release their inner warrior as you catch ’em all. Alongside the usual heroics, Kameo features an all-out war which your character charges through on horseback. Watching score after score of trolls fly up as you wade through their ranks is quite a sight and is the first sign that the new generation is capable of something truly new, more than just pretty graphics. In half a day I’ve sliced through about three quarters of the game so it’s a little short, but definitely enjoyable while it lasts.

The Live! system, which vaulted Microsoft high in terms of online play, has been modified too. New features in your profile include a gamerscore and a list of achievements. Achievements are defined by the developers of every game you play, and they can assign a given number of points to each one. The more games you play, the higher your score. Dead simple but effective. Similarly, rather than saving data on a per-game basis, you can now set up separate profiles for each player using the console. This way games are stored uniquely for that profile to save confusion. The ease and simplicity of the new interface is readily apparent and one of the box’s real highlights.

Whilst no more groundbreaking than any previous new generation of consoles, this is a big step forward. Until games from more of the big developers emerge it will be difficult to assess its true potential (and many will likely hold off purchasing until the arrival of Halo 3 next year), but regardless of what the cynics may claim, there is more than just a graphical upgrade at work here.