Unplayer One is a recurring feature exploring games in way that should appeal to those who enjoy art irrespective of the medium.  Unlike other review posts, these are likely to contain major spoilers so, if you have any intention of playing the game in question, please do so before reading.

Sitting in a car at traffic lights and discussing the nature of death with my cousin, whose mother had passed away a few days before, I found myself struggling to communicate an idea and instead explained it through my experience of the game Brothers: A Tale of Two Sons. In an increasingly common trend, Brothers was developed by a small breakaway team within a larger developer, Starbreeze Studios, a Swedish studio known for violent first person action games. A thoughtful, beautifully colourful fantasy tale about two young boys was an unexpected offering.

The initial premise is somewhat trite: two boys must undertake a dangerous journey to obtain water from the Tree of Life in a distant land to cure their dying father. The control scheme is immediately frustrating, with one half of the gamepad (one analogue stick and one trigger) used for each brother, whom you move simultaneously. It takes most of the game before it starts to feel natural but by the end it is clear that it could not have been designed any other way. Recent ports have brought the game to mobile devices but I think a controller is required for the best experience. 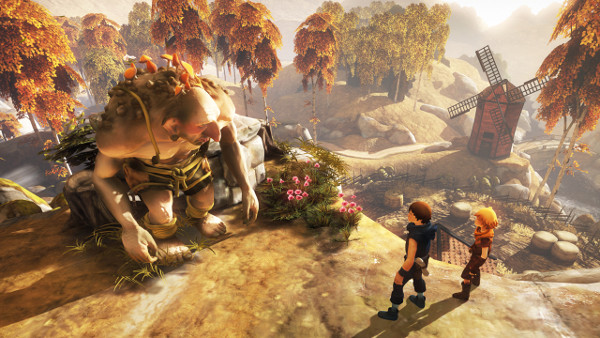 The game has no intelligible dialogue but the brothers work cooperatively as they traverse the land and help others they meet along the way. They meet two trolls who turn out to be friendly creatures that the brothers reunite. Nature is routinely their chief adversary, through dangerous animals or treacherous terrain. The game’s prologue shows the younger brother, Naiee, in a boat with his mother during a storm in which she is swept away and drowns. As a result, Naiee has a phobia of water and is unable to swim. Crossing rivers requires his older brother’s help, climbing onto his back and being ferried across. The trauma is deeply-rooted.

Towards the end of the game the brothers fend off a giant spider, but not before she mortally wounds the older brother. Although they reach the Tree of Life together, by the time Naiee has scaled its branches to retrieve the water, his brother is dead. He grieves, burying his brother. His sluggish, pitiful movements are affecting, but moreso is the effect on the control scheme. Suddenly you are playing with half the controller, with a single hand, as if you have physically lost a limb. It is a perfect parallel to the overwhelming sense of loss as we grieve the death of a loved one, as if we have lost a part of ourselves. But the game is not yet over and has more to say. Naiee must still return to his father with the cure. The return journey is smooth until, nearing his village, a storm floods the surrounding land. Frozen by the edge of the water, he cannot reach his father without swimming. The boy reacts as he always does near water, pausing, the controller vibrating softly in his refusal to move on. The game offers no prompt, but the solution emerges organically — the absent elder brother’s unused half of the controller becomes the key as Naiee draws on him for strength to proceed. Using both halves of the controller (as you had when crossing water so many times before), Naiee forces himself on, overcoming his fear and saving his father’s life. 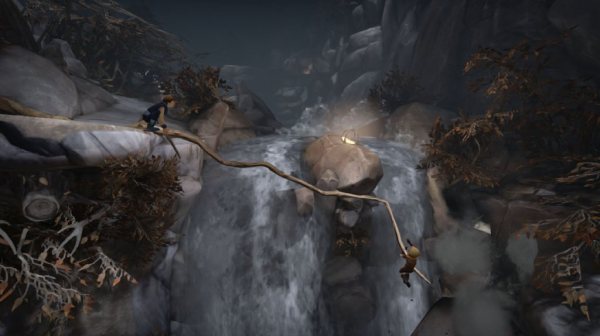 This, I explained in the car,  was my view of death. Irrespective of an afterlife, I find it difficult to view people as truly “gone” as long as we carry them with us. We often worry that the dead will be quickly forgotten but they continue to exist in our choices, our decisions and actions. In truth we only need to worry if they meant nothing to us at all, if they had no impact on us. Brothers was a perfect metaphor for this concept, and one that could not have been communicated so fully in any other medium. As a game, its control mechanics were not simply a way to tell a story but part of the tale itself.

In the West too frequently we shy away from discussing death, which leaves us ill-equipped to deal with the absolutely universal experience of grief, as well as our own mortality. Interactive art like Brothers can provide us with shared cultural touchstones and, as a result, better tools and vocabulary to explore these ideas. 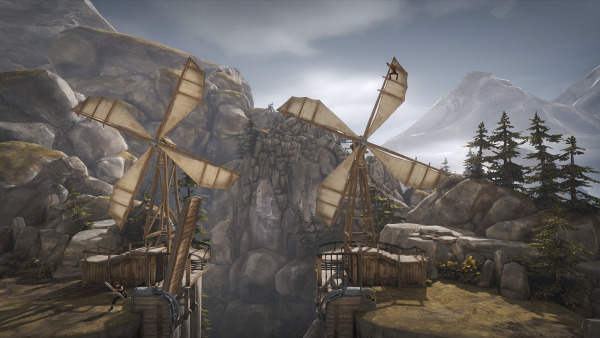