Exit, Pursued by a Bear Market

A close vote like this results in a swirling deluge of emotions that are difficult to isolate but my overwhelming feeling is one of disappointment, less at the result than at the people who voted for it. Yes, they were lied to repeatedly by politicians on the Leave campaign — and for much longer by the media — but these are lies they were willing to accept out of self-interest. Humans are convinced by the notion that that their capacity for rational thought makes them more than simply a selfish animal. That is often true on an individual level but, whenever it is tested on a larger scale, humans seem to be found wanting. Driven by a combination of greed and fear, politicians are able to manipulate them with remarkable ease.

When Trump ran for the Presidential nomination, vast swathes of the Republicans denounced him as not representing the party. Over time, given his overwhelming support, they had to look at their party and realise that, however distasteful his views may be, they appealed to the majority. The party was not what they had thought. A similar period of introspection is falling on the UK in a far more profound way than following any General Election, where negative reactions are shrugged off as sour grapes with a suggestion to do better in five years’ time.

With voting results skewed by the older demographic, the same people who ruined the housing market have now propelled their children down another unwanted path. The traditional threat would be to remind them that those children will be choosing their nursing home. As the leave campaign already backs away from its claims about healthcare, perhaps a more pertinent question would be whether there will be any affordable nursing homes for their children to choose.

Anger threatened to overtake disappointment when I learned of my little sister’s treatment this morning. Commuting to work she was approached on two separate occasions by people warning her she was “next” and suggesting she “go home now”. A colleague queried her history to decide whether she was a “foreigner”. In one morning she saw her home, the country into which she had been born, begin to crumble around her. I certainly hope that was an aberration, with the wrong sort of people invariably buoyed by today’s result, but I am far from certain. Here’s a tip for the students reading this post as they study for GCSE History in 2096: when asked to name two causes of World War III, Britain leaving the EU and the election of Donald Trump are probably good bets.

Of course I am being cynical. This country was already in a troubled state due to a huge and ever-growing class divide, the dangers of which were ignored even after riots erupted a few years ago. At the time I described it as feeling like “a caged beast had broken loose of its shackles and was determined to express its newfound freedom, knowing it was temporary, but roaring just to hear its own voice.” I have a similar sense today as that same divide and misplaced anger has led, in part, to today’s result. Leaving the EU will do nothing to improve this and, indeed, an unchecked Tory Government with increased financial control will undoubtedly widen the gap. As our good friends across the Channel would say, plus ça change… 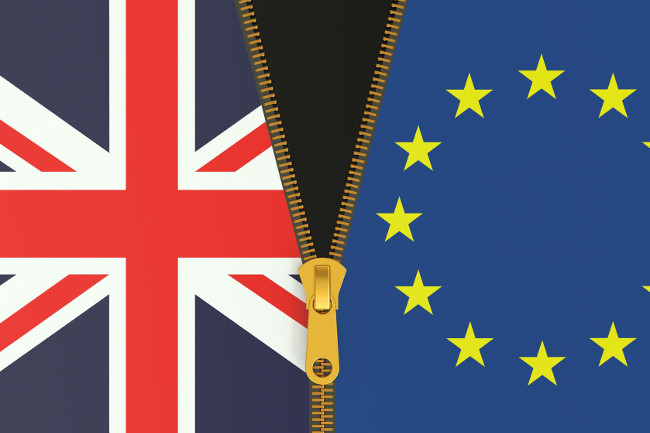 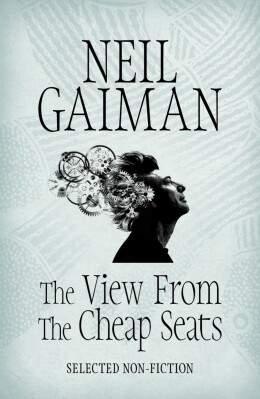 “I fled, or at least, backed awkwardly away from journalism because I wanted the freedom to make things up. I did not want to be nailed to the truth; or to be more accurate, I wanted to be able to tell the truth without ever needing to worry about the facts.”

—Neil Gaiman, The View From The Cheap Seats

Neil Gaiman may be best known for a mind that weaves together the fantastic and the mundane in fiction but, over a career of some forty years as a writer, all the articles and introductions and speeches and essays and interviews start to add up. The View From The Cheap Seats is a hefty selection of these non-fiction works, weighing in at over 500 pages. Fittingly for the title, I find myself sat up near the rafters gazing down at a beautifully lit church, the stage simply dressed and focused around two seats. Although I saw Neil speak last year around the launch of his short story collection Trigger Warning, being in the Union Chapel drew to the surface a very different memory from seven years ago. Neil reminisces about the same night, noting that he had not sung in public since his teenage punk years until, on the second of her two nights there, his girlfriend Amanda Palmer forced him to sing with her. This time round they are married, he introduces their baby boy to the crowd and then, in fitting role-reversal, has  Amanda open with a song before he takes to the stage. 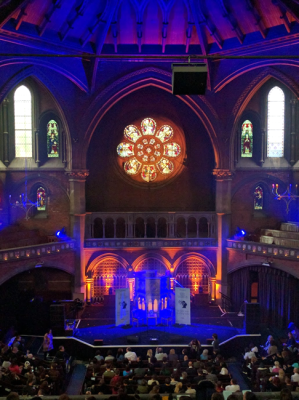 Discussing the purpose of the collection early on, Neil explains earnestly that if the reader picks up the work of just one of the many authors or musicians mentioned within then the book was worthwhile. The book is, in essence, an exploration of what Neil cares about, be it people, ideas, the literary world or the written word itself. It contains around a dozen introductions that Neil has written for other people’s work. The generosity with which he writes these stems from the desire to bring works he likes to a new audience. He also mentions a disgruntled Amanda Palmer fan who, on discovering that they were dating, bemoaned “How can she be going out with him? He’s written more introductions than books!” Not quite as scathing an insult as may have been intended — introductions are, Neil points out wryly, much shorter.

The most interesting points arising from the night relate to the proximity of art and reality. An audience member asks how often he steals ideas from real events. The answer, as any writer will know, is constantly. Neil responds that, although he always worries he might be discovered a fraud with no imagination (unlikely!), writing fiction swiftly teaches one not to feel guilty about such theft from reality else one would be forever feeling guilty. I tend to approach it from the opposite angle: writing non-fiction swiftly teaches a writer that there is fiction in everything, whether it is true or not. Scientists may take umbrage with this statement but, even when one attempts to present facts alone, the inevitable resulting oversimplification is itself a fiction.

Neil repeats an analogy offered by Amanda when comparing her almost autobiographical discography to Neil’s veiled facsimiles of places or himself. She described the process as having a blender into which they pour themselves. The difference, she said, is that she presses the button for only a second so there are still big identifiable lumps, whilst Neil holds it down for much longer crafting a more evenly blended product that is no less real. Although I write this very blog, I have often commented that several of the fictional Shards elsewhere on the site contain the truest things I have ever written about myself. It may be shrouded — blended, if you prefer — but it is there for those who wish to look. And honestly, I think it is always those kernels of truth (rather than the fiction within which they reside) that draw people in when they identify with a Shard. Fiction is simply a medium through which one can convey a truth and, perhaps, the most nuanced one we have. 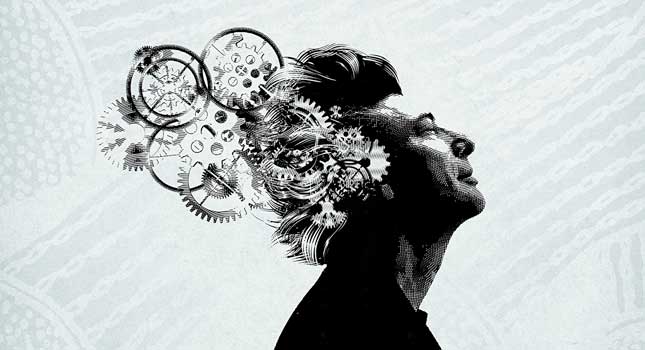