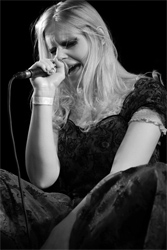 For those who don’t really care about the words that follow, here’s a gallery of photos from two Bitter Ruin gigs.

My overtly eclectic taste in music means that, while I certainly like some artists more than others, I have never been fanatical enough about a single band to become one of those dedicated few that follows the entire European leg of a tour, a permanent front-row presence that the band starts to recognise. While I wouldn’t trade the spread of music for a narrower focus, I always felt like I was missing out on some part of the fan experience. So it took me slightly by surprise when, during another band’s set at Bitter Ruin‘s Underworld gig, Georgia spotted me in the crowd and waved. Having accidentally discovered the band together, Romina and I now meet up every time the band play in London as a kind of sibling bonding ritual. Enough, certainly, that the band know whom we are and will even have the odd drink. 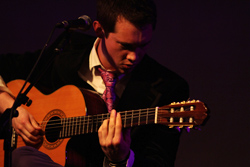 Unusually this meant seeing them play twice this month, both times in Camden: once at the Underworld at once at Proud. Seeing them twice is hardly a chore, but the second show was made more unique as the band were debuting both a new music video and new stage costumes, replacing the ones which had been their signature look for the past two years. Discussing the unveiling of the latter with Ben at the earlier Underworld gig, he seemed slightly confused by my apprehension, but given the theatrical nature of Bitter Ruin’s live performance, their fans have become so comfortably familiar with their stage appearance that any change was as unnerving as it was exciting. Naturally we need not have worried, their updated appearance creating a similar vibe with a more mature sensibility. I suspect Georgia was relieved to lose the heavy (if incredibly evocative) eye make-up, with the strange result that she looks younger while dressed older. The choice of song for the new video, the softer A Brand New Me, surprised many but looks as gorgeous as expected (if filthier), directed again by Mark Withers who also helmed the excellent Beware video. Meanwhile the band continue to take to the stage with increasing ease, Ben quipping, “When we say, ‘Any requests?’, what we mean is, ‘Can you guess what song we’re going to play next?'”

Hello, My Name Is TED

I routinely omit recommendations for great TED talks here because I entirely forget that most people in my circles don’t already watch them. A fact I forget because it seems like exactly the sort of thing most of them ought to. My TED consumption increased dramatically once I could stream internet video to my TV, and now a few mornings a week I can be spotted ironing a shirt while watching one (albeit that unless you are Anna, spotting me would require being a stalker, a burgler or an over-enthusiastic MI5 operative).

TED talks are short (between 5 and 20 minutes) lectures on a wide variety of subjects, pertaining in general to its acronym of Technology, Entertainment and Design, and moreso to its tagline “Ideas worth spreading”. The speakers are generally fantastic: leaders in their field but also engaging presenters. And the topics are regularly inspirational. More so, as I recently proclaimed, than starting the day with yoga.

The talk that prompted such a statement (which met with mixed reactions depending primarily on whether people had recently watched a TED talk!) was one given Deb Roy, an MIT researcher who coated his house in cameras and microphones before the birth of his son, and then ran analysis on the first two year’s of footage to study the acquisition of speech. His ideas on feedback loops in taught language, as well as the connection between spatial movement and speech, were fascinating. But the inspirational part was what he describes as the audio equivalent of one those time-lapse videos in which you see a flower bloom; he played a 40-second recording of each time his son attempted to ask for water, as over time “gaga” evolved into “water”, or as he puts it, witnessing the birth of a word.

Meanwhile, as a species we are more inclined to waste our hours on the undeniably compelling train-wreck of Rebecca Black’s Friday, which was best described by Nick as post-modern trolling. Could we not, instead, listen to Sarah Kay’s rather more inspirational spoken word musings on the wisdom she hopes to impart to a daughter?

Recent posts have been infrequent and, as a result, lengthier once I have both something about which to write and the time to do it. This means I have been reluctant to pad them out further with the usual assortment of links and asides that I’ve stumbled upon in my online travels. So here are the latest in a light-hearted Short Post of No Consequence.

I take no responsibility for procrastination caused by the reading of this post.

On 30th March 2005, at a Nine Inch Nails gig at the London Astoria, I stumbled upon a small theatrical two-piece band from the US called The Dresden Dolls as they broke into the UK music scene. While their short support set blew me away at the time (and arguably outperformed the headline act) I probably didn’t realise the lasting impact they would have. Sadly I never had another opportunity to see them live before they split up.

One half of the Dolls is Amanda Palmer, who is regularly mentioned here as she routinely tours the UK. And so, a few years after I first saw them, I was able to have her sign my Dresden Dolls album. Drummer Brian Viglione, on the other hand, remained in the States and never graced our shores with his presence. It seemed increasingly unlikely I would ever get the album fully signed but it sat there, an unfinished work in progress, and it gradually evolved into a Weird Life Goal eventually to complete it.

Years passed. Amanda continued to visit the UK. Brian did not. At a concert disrupted by the volcanic ashcloud, another small theatrical two-piece called Bitter Ruin stepped in to support Amanda, and my sister and I became instant fans. Earlier this year Bitter Ruin announced a March gig at the Underworld with the newly formed Gentlemen & Assassins, fused from several bands. Their drummer: Mr Brian Viglione.

Even as I dropped the half-signed album into my camera bag, I didn’t really think it would happen. And frankly seeing Brian drum was enough. His skill is in making precision seem effortless; instead the energy (and there’s a lot) all goes into infusing his performance and sound with character.

But after the gig he emerged — those who have met him will know he is the nicest guy, incredibly grounded — and was happy to sign everything from legs to ukuleles to, well, my album. If you want to know what a Weird Life Goal looks like, here it is. We chatted briefly, I mentioned seeing the Dolls play live with NIN (“At the Astoria?” he asked incredulously, “Wow.”) and it dawned on me just how long this moment had been in coming. The signed album was insignificant, but the breadth of time and experiences it represented were not. I grinned the whole journey home.

So I guess the point of this is post is not to give up on those Weird Life Goals, however unlikely or unnecessary they seem. What they represent is something else entirely, and from the other side they will always make you smile.

Apologies for the inexplicably low-quality thumbnail images in this post.

I took a couple of days off at the end of last week to extend the weekend and catch up with a few people. How about some micro-reviews? Catching up on films I missed: The Social Network (excellent), Milk (great) and Alice in Wonderland (should have left it missed). Good food: St John Bread and Wine (fantastic plates to share with superbly selected ingredients) and Borough Market (great, obviously, resulting in a fantastic home-cooked breakfast of scrambled duck eggs with fennel-infused salami).

For Saturday brunch I met Sarah in Bermondsy where she introduced me to the bizarrely bourgeois market that has sprung up in the local railway arches. While the area is undergoing regeneration, one assumes the myriad council tower blocks are not filled with the target consumers. Some of the fresh produce sellers apparently became disenchanted with Borough Market and moved. From a buyer’s perspective the lack of the bustling Saturday Borough crowd is certainly welcome.

The last location we passed, a newly opened wine and oyster bar (at 11am, remember) was so ridiculous that we began to ponder what sort of outlandish niche offering we could open in our own arch. Specialised balcony foliage was mooted alongside a decidedly middle class culinary equipment store that sells those weird kitchen utensils lacking discernible origin or purpose. Sold in packs of three to suggest you really ought to be using several.

Once we warmed up — and dropped any pretence at political correctness — the unexplored opportunities crystallised. An import baby store seemed ideal for the up-and-coming would-be parent. With a worldwide selection the fashion-conscious will be able to select the latest styles to match seasonal trends. A Dulux-style colour-matching service would let customers bring in sample material in their desired shade for our dedicated selection team to work their magic. The name, of course, was obvious: United Colours of Bermondsy.

Meanwhile Sarah offered a business plan for Natural Disaster Soaps (“Natural” or “Organic” being key words guaranteed instantly to double interest in your business). The basic premise is overpriced soap inspired by Fight Club. The difference is that rather than sourcing materials from liposuction clinics, we use reclaimed fat from natural disaster victims, and thus assist in the clean-up process at the same time. Connoisseurs may select between “single estate” and blended varieties from multiple disasters.

I daresay we’ve converted a few customers to our new businesses in the time it’s taken you to read this post.