The USA 2010 photo album is now up but, since I haven’t really discussed the trip in much detail, I thought a quick summary of what we got up to so that the photos have some context. Some ground rules: no kicking, no biting, and absolutely no pointing out that half of these photos were technically taken in 2011.

A week late, I arrived in Baton Rouge around 9:30pm on Christmas Day. Jenna was at work (she agreed to work Christmas Day and New Year’s Eve in order to get the rest of the holiday off) so, after meeting their newly “aquired” dog, Jeff and I attempted to stay up, fuelled by Zombieland. Sadly Christmas Eve in the bar of the airport Hilton followed by 20 hours of travelling caught up with me as soon as the credits rolled; I was asleep and unstirrable when Jenna returned.

We soon made up for lost time, heading to Natchez in Mississippi to spend time with her parents (and mine). While there our exploration took us to Windsor Ruins, the handful of columns being all that remained of a once grand house, the Schafer House where the first shot was fired in the Battle of Port Gibson during the Civil War, Jefferson College, a former military academy, and Longwood, a sadly never-to-be-completed octagonal mansion.

We returned to Baton Rouge for a single night to catch the musical gang Jeff, Jesse and Matt playing their weekly gig at family restaurant Appleby’s, where Jesse is a manager. I’d seen the guys casually jamming at the house a few days earlier, which took me back to an evening I spent with Jesse and Jeff years ago, when they played a rather haunting acoustic cover of Tool’s H. I also finally met Morgan because, Jenna explained, it was vitally important that I meet Morgan and how had this never happened before? (Presumably this meeting has now averted a future world-threatening, space-time paradox; it felt like it was probably that sort of meeting.) Post-gig I disappeared with Jane and a friend of hers (apparently creating gossip) to what I shall affectionately describe as a karaoke dive. A stunning (female) rendition of Rush’s Tom Sawyer made the night though.

Jenna and I had the day to ourselves on her birthday, so we decided to go photographing together. We grabbed our cameras and ended up at Circa 1857, an old vintage/antique/art store. Also, they had hats. Lots of hats. On my final evening we built a wagon that had been bought as a Christmas present and took the kids to a nearby basketball court and playground. Although I nailed my first basketball shot in years, ultimately I think I confirmed it’s probably not my sport.

For those with access, there is a fuller rogues gallery of the people involved up on Facebook. Now that Facebook’s image quality has been drastically improved, I don’t mind putting photos up there quite so much, though this site will still be the first place to look.

I mentioned recently that I was reading The Graveyard Book to the kids (and Jenna) in the States. This inspired the aged photo here, having realised how much the young Bod is like Clark. Sadly I was too slow with recording the remaining chapters so Jenna and Karleigh gave in and continued reading themselves — disappointing, but not exactly unexpected.

As I mentioned to Jenna at the time, I really miss the opportunity to read out loud. I would occasionally read aloud to Kirsten while we were together, and even at school I liked the experience of bringing apparently dull words to life. There is something — not quite primal, but at the very least tribal — about the act of storytelling. It is an interactive form of entertainment in which both the storyteller and audience are complicit in conjuring a world from nothing; neither can operate alone since one can only inspire the imagination of another, not control it. It is, naturally, more rewarding if you can see the reaction from your audience as you progress (and that may in turn inform your own narration) but the Atlantic still has much for which it must answer.

So a new question: what else would people recommend as good children’s books I could read? Ideally these would be either British or older books which they otherwise might not come across, as Jenna will undoubtedly have a readily available stream of recent home-grown fiction to read Karleigh. And nothing that falls into the horrific apparently-this-is-now-a-genre-with-an-entire-shelf of “Teen Supernatural Romance”. I already have the first in mind (which I had been intending to buy for Karleigh in a year and a half or so, for her to read herself): the first of Diana Wynne Jones’ Chrestomanci novels, Charmed Life, which struck a chord with me as a boy when I first listened to it as an audiobook (or rather overheard it while my mother was listening). 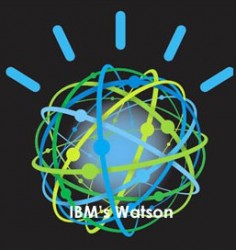 Meet Watson. Yes, those IBM researchers are at it again, with their crazy attempts to ensure the redundancy and probable destruction of the human race. Or, more accurately, another attempt at a human-beating game-playing computer. This time the goal is a machine that can best the top human contestants at US gameshow Jeopardy! next month.

Unlike its chess-playing predecessor Deep Blue — where the problem to be solved was largely computational — DeepQA/Watson’s ability to answer trivia questions depends not only on swift information retrieval but upon some serious advances in natural language processing. In short, the key hurdle that has so far limited my dream of a future house/virtual butler to which I can talk. So imagine my surprise when, in yesterday’s test run, Watson actually triumphed.

Typically I update sporadically from the States but, having already lost a week to the snow, I decided to shelve writing or posting photographs until my return so that I could maximise time with people there.

Returning from holiday is always a slightly unsettling experience, captured beautifully by Dido’s Sand in my Shoes. The USA in particular leaves my head in a slightly weird space: happy to have seen my family over there and yet distressed by the gaping chasm of their absence, which naturally feels more immediate than before the holiday. This time has been particularly bad, however, and I think I know why.

Although we moved back and forth between Baton Rouge and Natchez, this was no travelling holiday. Essentially I just moved in with Jenna and her family, in a city that I know well from having lived there for several months (at least half a year in total). Rather than doing the typical holiday things we just lived together: cooked food, had friends over and mixed cocktails, watched DVDs, listened to music, watched British TV shows, looked after the kids, took them to bookstores, picked them up from school, read bedtime stories when they couldn’t sleep. Recovering from a holiday can be a little hard. Recovering from briefly living another life can be gut-wrenchingly painful. And yet, if the many-worlds interpretation is correct, I can at least take a little solace in the fact that — somewhere out there — there are other versions of ourselves who all live much, much closer. I certainly hope so.

The new camera got plenty of use and the results will be up as soon as I can get through them. I am slightly delayed by the fact I only got halfway through reading The Graveyard Book to Karleigh and need to finish it off. Unfortunately the time difference means Skype isn’t ideal, so I’m open to recommendations (both for recording and sharing).