Neither A Borrower Nor A Renter Be

Most people find it odd to discover that despite my not particularly veiled obsession with film and sizable DVD collection, I have never rented one (as in paid-to-rent, fuzzy library VHS tapes were an exception). Until now, that is, as I have just signed up to a one-month LoveFilm trial and fully intend to continue. So what changed? Well, understanding that requires explaining the reason I avoided rentals to begin with.

I have always said the size of my film collection is deceptive in that, although there clearly has been a significant financial outlay over time, it was nowhere near as much as it appears. This was achieved largely through the (necessary) imposition of strict pricing rules when purchasing DVDs (generally under £5 for a standard film, £8 for special editions, £10 for foreign and rare discs). This meant that in most cases the cost of renting a film more than twice would exceed the cost of buying it to watch forever. If it turned out I didn’t really like the film, selling it on (or usually trading in) would tend to result in a “loss” of about the cost of a rental.

What changed is the expansion of rentals into blu-ray and videogames where the margins are significantly higher. A mediocre game may be worth playing, but isn’t worth the £40 price tag on release. Unlike DVDs, it’s likely to take such a game almost a year to tumble to a more acceptable price and by then its resale/trade-in value is likely to have diminished entirely. Similarly, although I tend to shop around for blu-ray bargains (Cheap Blu-ray Movies being an invaluable resource), it’s a more dangerous prospect to buy a film you’re less than sure about — though there are exceptions as I recently made £3 by watching the new high-def release of Total Recall and selling it on.

So my LoveFilm list is entirely populated with blu-rays and videogames, and each month I expect to play through a game and check out 3 films that I’m not yet sure about. Even subscription-based rentals services will never replace my need for a film collection (at least until an on-demand streaming HD library is a workable reality) since predicting my film mood in advance is largely impossible. Nevertheless my staunch anti-rental policy has now gone the way of those snowy over-used VHS tapes…

Incidentally the first film I rented was My Blueberry Nights, Hong Kong director Wong Kar Wai‘s first foray into English language cinema. It received a decidedly lukewarm critical reception which put me off for a while, but his always exceptional use of light and colour makes for gorgeous HD viewing. Despite the uncomfortably stilted dialogue, and perhaps due to lowered expectations, I thoroughly enjoyed it, particularly the mood it effortlessly evoked. Anna was also a fan.

And finally in unrelated (but awesome) news, a Dr Horrible sequel is now official. 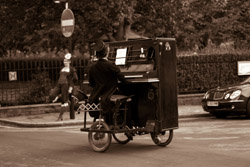 Chatting to people queueing for the gig, we all agreed that explaining to friends what we were doing over the weekend was an impossible task. To those unfamiliar with Amanda Palmer it is difficult to convey how much more than the average gig her concerts tend to be. Event is a more appropriate word, as evidenced by the large number of elaborately garbed fans that made many of us feel horribly underdressed. On Saturday evening I saw amorous puppet replicas of Amanda Palmer and Neil Gaiman, a mobile piano mounted upon a bizarre pedal-cycle contraption, and upon Amanda’s arrival, the top being set alight as she proceeded to play a flaming piano. Bear in mind this was all before we had even entered the venue. The photo gallery will give you some idea.

Musically her solo work is a logical progression post-Dresden Dolls. Her former band was already a stripped down two-piece affair (most arrangements were for piano, drums and vocals), describing their genre as “Brechtian Punk Cabaret”. Her solo work is arguably less Brechtian, but the punk cabaret and bare-bones sound remains in full force. It really lets the colourful wit of her sometimes playful, sometimes intense lyrics shine. Although the content of her songs may seem at odds with a church, the interior of the Union Chapel, with its gothic Victorian architecture, stunningly lit in blues and purples, was the perfect venue. 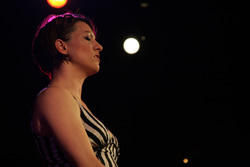 Polly Scattergood offered a good supporting set despite the limited material she has released so far. Most interesting to me was actually a stunningly honest unreleased song which suggests she has plenty more ground to cover in future albums. Amanda began both her main set and encore with a capella renditions that showcased how tightly impressive her voice can be, particularly in the emotionally charged cover of Tori Amos’ Me and a Gun. The rest of the set covered her solo album and several classic Dresden Dolls songs, as well as requests from the audience and even dipping into classical piano (mostly as a challenge to herself). All the while an artist was painting a large canvas at the back of the stage, the resulting artwork auctioned off at the end of the gig. Such was my enthralment with the entire night that I very nearly ended up spending £350 on it (it went for £450 in the end).

It was broken up by “Ask Amanda” segments, a Q&A via written questions dropped in a box before the gig. Her genial responses covered her experiences of the English and the unfairness of dating Neil Gaiman — catching up on each other’s careers meant she handed him 3 CDs to listen to, while he passed her two large boxes of his collected works. Speaking of Neil, he was travelling with her too and took on singing duties for a tongue-in-cheek “hymn” that contrasted comically with our surroundings as the entire audience broke into (slightly nervous) laughter. Her gigs inevitably feel like “Amanda and friends”, drawing in all the interesting creative people she has recently met. It is a testament to her generous spirit that her immediate desire is to share these talented individuals with her fans, and that is what makes her a beautiful person and her performances a joy to attend.

For those interested in the music, here are Spotify links to full albums by Amanda Palmer and Polly Scattergood.