Tomine’s genius is to strip his medium of every possible type of grandiosity or indulgence, and the result is that life itself floods in.

Last week I was browsing Forbidden Planet’s signed books and came across Adrian Tomine, a graphic novelist with whom I was not familiar. His real world stories revolve around relationships and immediately evoke Daniel Clowes‘ Ghost World

, in both visual style and socially awkward characters, although the subject matter is slightly less offbeat. I picked up signed copies of Shortcomings

and devoured them in quick succession. Particularly interesting is Tomine’s often cinematic style in which the reader feels they are watching a scene through a camera, lingering with identical panels. Scene changes are often abrupt, occuring in the middle of a line, and many conversations are joined mid-flow. From context it is always easy to extract what has been discussed previously, but the precise words are left to the reader. As contemporary fiction that just happens to use a different medium, Tomine is subtle, intelligent, easy to read and highly recommended.

While I still love my current camera lens (a Canon EF 28-135mm f/3.5-5.6 IS) there are certain things it can’t do. The main issue is low-light shooting since I detest flashes. If the subject is stationary there is little problem, particularly with the lens’ image stablisation, but those of the organic variety do have a tendancy to move. The trade off is then blurry shots or dark images. In short: time for a secondary lens. It didn’t take much research to stumble upon Canon’s EF 50mm f/1.4, a prime lens (non-zoom) that is by all accounts beautifully crafted, letting in a huge amount of light and producing incredibly sharp images. Unfortunately I wouldn’t know. Nowhere in London has been able to sell me one. Because they don’t have any. If any photographers out there have a secret supplier please let me know.

A few days ago I mentioned the sudden expansion of Twitter as celebrity bloggers brought it into the mainstream. It becoming mainstream, while it may be less of a “club”, is no bad thing. The celebrities, however, might be. Stephen Fry and Jonathan Ross both have extraordinary numbers of followers but, while both being intelligent and witty people, neither really seems to have that much to say. Rather their feeds are filled with drivel, mostly pandering to people who want to receive that one personal message from their célébrité du jour. I am not saying I have found the perfect balance for my own Twitter feed, but I also know that there is enough background noise in my life without needing to add these kinds of celebrity microblogs.

I do have one on my list though: Neil Gaiman. It’s not that unnecessary minutiae do not appear in his, but the majority are interesting links related to his work and that of his acquaintances. If you must include celebrities, I strongly recommend TweetDeck which lets you organise the feeds of those you are following into multiple columns so you can separate out friends for example. By default it also keeps replies and direct messages separate so you can easily identify and respond to them. TweetDeck requires the Adobe Air platform to be installed.

An Oscar a Day?

Apologies for the short downtime this morning due to problems with some behind-the-scenes upgrades. Typically the start of the year features several films that might legitimately be described as Oscar bait, the idea being that they will remain fresh in the Academy’s mind when it comes to that pesky system of actually selecting the winners. This year things have gotten a little ridiculous with virtually nothing of that callibre being released throughout the year as if everything has been saved until now. Is Hollywood’s memory really that short-term? The studios and distributors certainly seem to think so. This has caused a sudden flood of releases I’m keen to see, with the result that I’m quite likely to miss a few. In a vain bid to rectify the problem, this week has almost turned into an Oscar a day, with The Wrestler (last night), Frost/Nixon (tonight) and The Curious Case of Benjamin Button (maybe Friday) all down for viewings. The downside is at that rate I almost certainly won’t have time to write reviews for everything I would like to. We shall see.

Mostly today’s post is another catch-up with things I’ve been meaning to mention: 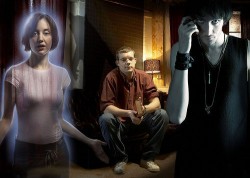