Saturday’s graciously fair weather was particularly welcome as it featured a trip up to Oxford for Chris and Alissa’s wedding. In a rare display of efficiency, the anticipated gallery of wedding photos is already up. Those pictures probably convey more of the wonderful day than I can with words, but then that’s never stopped me before… 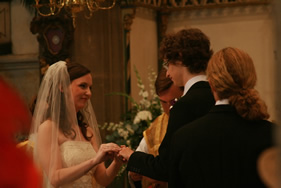 The wedding itself took place in the heart of Oxford town in The Church of Mary Magdalen (the name being pronounced, somewhat confusingly, in the regular manner unlike the inexplicable Oxbridge college pronunciation — maudlin). Chris and I have discussed the high church nature of the services there, but I had not realised the true extent, with the whole affair easily mistakable for a Roman Catholic one. Having lived opposite them for years I know all his family well so it was great to see his parents, brother-and-best-man Alex, as well as sister-and-bridesmaid Jennifer. 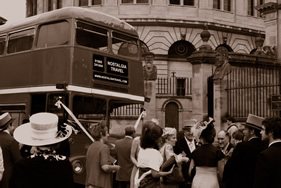 Transportation to the reception had been something of a secret, the bride and groom travelling in a replica of the car driven by Inspector Morse, while everyone else clambered aboard a Routemaster bus, presumably for the benefit of the visiting Americans, Alissa’s family and friends. We journeyed to Kingston Bagpuize House for the reception. A marquee in the garden featured a string quartet, drinks and canapés while everyone settled in. Most interesting however, was the artist who cut out freehand profile silhouettes of the guests without drawing anything first. He had an exceptional eye for picking out details and everyone was enthralled by his work. Meanwhile I was able to catch up with Guy, Francis, Ravi and Cameron who formed the Whitgift contingent. 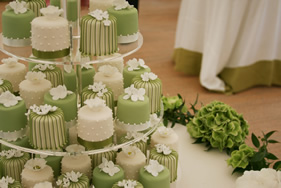 The cutting of the cake — being a large one atop an impressive tower of smaller cakes that formed the marquee’s centrepiece — was followed by dinner inside the house. It was as delectable as one would expect, with a careful seating plan that ensured conversation flowed easily despite the mixed generations. The bride and groom made it through the speeches relatively unscathed, though with time slipping away proceedings were running very late and I had no hope of returning to London that night as planned.

Fortunately Chris’ parents, Sue and Dick, graciously agreed to put me up in their apartment (the benefit of being good friends with the groom’s parents!), though as it turned out I only hit the sofa bed at 5am after several hours of celebrations with Alex, Jennifer and several others. This would have been fine except that I had to be up just 3 hours later to head back to London for a family lunch. Navigating Oxford in the morning light made me realise it really is a pleasant town that I ought to spend more time in, much as Cambridge will always hold more importance for me. Fortunately I already have invitations to return. 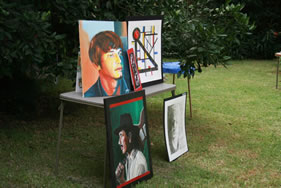 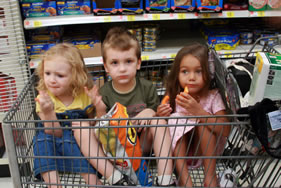 While the photos are being sorted out, here are some miscellaneous musings from my trip…

I had always assumed one of the drawbacks to city living in somewhere like London was the background noise — an incessant din which prevails throughout the night. Imagine my surprise to find that the comparably insignificant town of Natchez (and even Baton Rouge on some nights) was far louder outside, with a near deafening roar from cicadas in particular, as well as creatures of that ilk. Cicadas are particularly loud insects since their “singing” is not produced by rubbing parts of their body, but rather through clicking “timbals” in their exoskeleton, the sound being amplified by using their body as a resonance chamber.

The Coca Cola issue has become more severe now that I drink it more regularly in the UK, to the point where I actually have to avoid it in the States. Most Americans are sadly (blissfully?) unaware that they are given worse Coke than anywhere else in the world. In fairness, regular travellers aside, the rest of the world is largely unaware that US Coke is so bad either. The reason is that proper Coca Cola is sugar based, but the US variety is made with cheaper corn syrup instead. This actually spans to most soft drinks there, but the flavour is particularly noticeable in cola. You have been warned. And Americans, come try the good stuff!

Jenna and I share similar views when it comes to children’s books, both disliking the majority of modern drivel which is thrown at kids on the basis that so long as they are reading it’s a good thing. In fact bad books can even stifle their imaginations. For example Karleigh produces all sorts of stories when playing with her toy ponies but in the bookstore, were one to cave to her whims and buy the branded tie-in pony books, she tends towards reproducing the basic stories within rather than inventing her own adventures for them.

Personally there are two things I expect from a good children’s book: inventive originality to develop imagination and avoiding talking down to children. The latter means a decent vocabulary in order to expand the child’s, as well as content with some sort of depth, which sort of ties into the first part. There is a strange idea that children’s stories need to be obvious when in fact children are often more open to parallel imagery than adults. Neil Gaiman’s books for children have always appealed to me since, as an author of adult fiction too, he does not sit down with the goal of just producing a children’s book. Rather he has various ideas some of which suit novels or comics while others work best as children’s books. I was glad to be able to buy a copy of The Wolves in the Walls, a personal favourite, for Karleigh.

On a related note, all parents should carry around notebooks to jot down those wonderful things their child comes out with (and an adult never could). I heard several Karleighisms during my trip that I’ve already forgotten and wish I had written here or elsewhere. The alternative is to attach a dictaphone to your child but that might be considered expensive, time consuming and also slightly creepy.

I will write about the rest of my Stateside exploits once I go through the several hundred photographs from the trip and trim them down into something more manageable (hopefully without the Gallery glitch that plagued my last USA trip and I never actually solved). For now I will just discuss the fairly painless trip back.

Although they were keen to carefully rescan the Nintendo DS Lite I bought Kirsten as a birthday present (the dual coloured ones are very sleek with a matt black interior and back, clearly designed more for business executives than younger gamers), American security surprisingly gave me less hassle than their British counterparts. On the other hand most of the security was at the quaintly parochial Baton Rouge airport, with all of ten gates (a substantial rise, I am told, from its original four).

Jenna brought me to the airport with Karleigh and Clark so, several dozen photographs later, it was pretty hard to tear myself away. Things improved at Bush Intercontinental in Houston as I had a couple of hours to kill drinking martinis in a bar and chatting to a pleasant LA resident who was in town for a radiotherapy trade show. With his girlfriend working in “the industry” (she was a set designer on the short-lived Joey) we discussed the risk of an impending actors’ strike in the coming month. That for me is what travelling alone is really about, and the essence of what Frank Moorhouse meant in describing the martini as a travelling drink.

I also stumbled across a store that was demoing Shure earphones, specifically the SE310s that I have been eyeing for a while, allowing me to try them with my own music. In short they are exactly the revelatory aural experience that I had heard and have suddenly jumped from merely desirable to a must-have purchase. I didn’t dare try the SE530s for fear that their £250 price tag might start to look appealling. The 310s will be more than enough for now. My only concern is that with the foam earbuds (not the rubber ones pictured here) expanding further into the ear canal than I had realised, providing a great sound isolating seal, they may become dangerous for use when walking around the City. That would mean I’d need to carry two pairs of earphones which is cumbersome. Real world testing will be the only way to find out I suppose…