Stephen, with whom you may remember I was working defending kids in a Louisiana juvenile court during my gap year, has been making veiled references to “the interview” for several days. It turns out the discourse in question is regarding his involvement with and views on the Nicaraguan election of 1990. The full transcript, made available by Nic, is an interesting read with an insight into US foreign policy in “influencing” elections. It is really more of a personal account by a then political activist (and now full-time lawyer). La lucha es la victoria, he says during the interview, a phrase that became something of a motto for us while we worked often on seemingly hopeless cases: the fight is the victory. 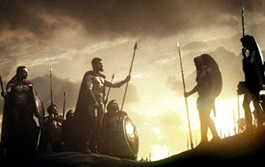 graphic novels to the big screen, a sequel was certainly expected if not inevitable. One suspects it will be worth watching if largely inferior to the original simply because he selected the three strongest stories to work with the first time around. More interesting is the emergence of 300, a film based on another of Miller’s comics

about a desperate battle fought by a hopelessly outnumbered band of Spartans. With a recent glut of films in a similar setting I had not fully appreciated the goal here until I saw the lush visual style evident in the recent trailer. It often appears more like a painting in motion upon the canvas and looks to be a stunning depiction of a group of men relinquishing their lives for their homeland. An act of defiance not for the outcome but for the act itself.

In both stories, whether in Nicaragua or in Sparta, the moral seems the same. And those words, the gravitas of which I only half grasped at the time, seem truer as time passes which is why I thought I’d share them with you. La lucha es la victoria.

in its swanky black tin. It has now been hailed as GameSpot’s Game of the Year, a title I for which had thought Oblivion’s vast expanse was a shoo-in. Discussing the game without hyperbole is somewhat problematic because it is the sort of rare gem that demands or even requires it. 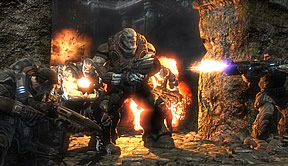 The Unreal 3 graphics engine is very, very pretty. But we already knew this. The “destroyed beauty” art style (the game begins several years in the war between humans and the Locust horde) showcases it in a way that often makes you just stare in the game’s quieter moments. Despite the shallowness that first person shooters often display, what makes this a truly standout game is the fact the visuals are almost irrelevant to a discussion of its strengths — they speak for themselves, after all. Rather the slick production of everything from the soundtrack to the cinematic camera angles and presentation to the characters themselves are what boost this product to another level. Well, that and the exquisite composition in the unification of the gun with a chainsaw bayonette. That alone is almost worth the price of admission. The characters are jocks, to be sure, but hulking badasses like this are great fun to play, particularly with the sort of banter that has been a pre-requisite since the Aliens film. The bottom line is that Gears is as close to stepping into sci-fi action movie as I have ever experienced.

The game has two difficulty settings to begin with: Hardcore and the slightly insulting Casual. Insulting, because even seasoned FPS fans may find themselves reverting to Casual on their first play through. Cover is essential in this game as bullets hurt and the dynamic of swiftly diving behind cover and then rolling smoothly between them can take a little while to get down. Now, all I need is a partner to play co-op. Any takers?

In response to my previous appeal one kind soul posted a link to the Ban ki Moon video I so desperately sought, courtesy of the BBC (video link on the right).