Since a large percentage of blogs around the world will be mentioning the boy wizard today, I figured I would too. The delivery man woke me up this morning when delivering my sister’s copy of the new book. I’m not happy.

Actually, my viewing figures are going to be pretty low today what with a lot of you reading the damn thing so now’s a good time to bury any news I don’t really want read. But I suppose that would be a rather cynical use of a children’s publication. Rav tried to complain that I’ve forgetten how to get excited about such things, but that’s just not true. People had to put up with me gushing about Sin City for over half a year before its release, forcing anyone who lingered too long in my room to sit through the ten minutes of leaked Comic-Con (strangely enough, this year’s is happening as I write) footage. I shan’t make the obvious Star Wars allusions as, despite being a big fan for long time and being drinking up The Clone Wars animated shorts pre-film, there are certainly bigger. But then there was the new season of Family Guy that had me buzzing for days about when I suddenly realised a real life (okay, cartoon) new episode would be on my screen in a week. There was the release of Bungie’s new opus, Halo 2 (see Lyds’ photographic evidence), and I was happy to add myself to its ridiculous list of pre-orders (£35 million in sales before release!). And, as with every Tim Burton release, I’m now tingling with anticipation at seeing Depp’s utterly unique incarnation of Willy Wonka. And there’s a little film called Serenity written and directed by this Joss Whedon chap that’s been wrapped for months but delayed and is finally out soon after I get back to uni (so TomTom and I can see it together after all). So I still get plenty excited, just about…well, the things that exite me. I wouldn’t expect you guys (except Chyde) to get excited about the eventual re-release of a R2 copy of La Cité des Enfants Perdus in French with English subtitles rather than the horrible dub, but I (and he) will be excited nonetheless. 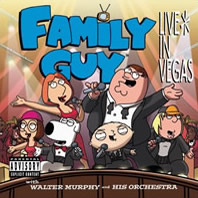 Speaking of Family Guy, I recently came across the CD they released prior to the new season, Family Guy Live in Vegas and it’s fantastic. Actually edgier than the show since the lyrics escaped the censor’s “beep”, the album is a mixture of hilarious but overt faster numbers and some classy slower stuff reworked and sung by the gang. Seth Macfarlane’s voice is surprisingly smooth, especially when singing as Brian the dog.

In other news, after the cancelled shuttle launch on Wednesday several people seemed perplexed as to how T-20 minutes could actually be several hours before launch. Check out NASA’s Countdown 101 for full details of the pre-launch clock, which starts at T-43 hours a little over 3 days before launch.

And in closing, just for you Potter fans, next time you use the HBP abbreviation, remember it could be mistaken for High Blood Pressure, History-Based Predictor, Hit By Pitch (in baseball), Hydrogen Behaviour Program, or of course, Herr Bundespräsident. Just a thought.

In all seriousness, I have no problem with people’s excitement regarding young Harry. It’s cute. I’m just irritable because your book woke me up. Really.