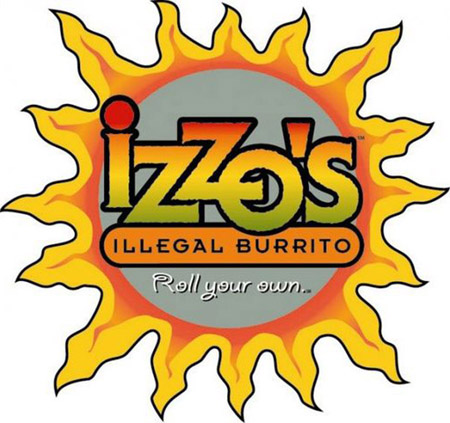 They really deserve an entry of their own since as well as being Jen & Jeff’s best friends, they’re really like a second family too. And they welcomed me so fully that it was pretty hard not to feel at home there. I’ve actually eaten at both of the restaurants in which they work while they were on duty during my stay here. Cassie waitresses at the Mexican chain On The Border, while Jesse has now been given supervising shifts at the ominously named Izzo’s Illegal Burrito. “Joint” is definitely the right name for that “roll your own” burrito place where you choose your fillings from those on offer and the staff really cram ’em as full as possible. Sort of reminded me of Doughmasters back home, but more mexican and with more choice of wraps. And I even have a T-shirt, courtesy of Jesse, which I still wear despite the fact it’s XL to match his…larger than life personality! 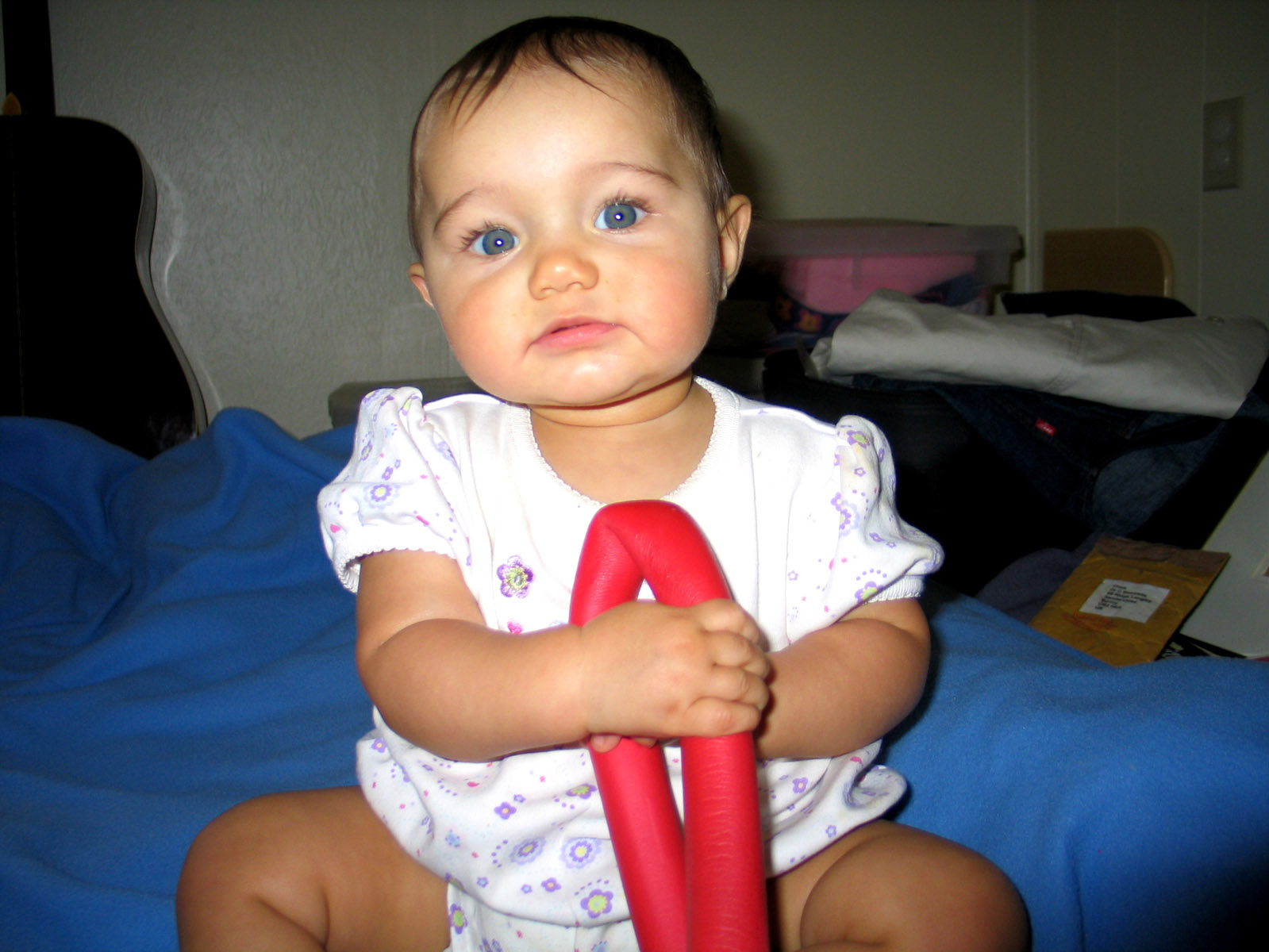 I hung out with them a lot after getting back from the Gulf Shores, including a fun game of drinking worms with Jesse (well, someone had to entertain him after Jeff refused to join in!). Just before I left I also got to meet his mother, of whom I had heard a great deal, so it was interesting to put a face to her. I think Cassie was a little worried that I was getting bored with the babies and baby talk (her son, Maddox, must be above three or four months younger than Karleigh) but honestly I didn’t mind what I was doing so long as I got to spend time with Jen and Karleigh before leaving. Actually, the image Cassie will probably keep is of me balancing Karleigh on a tabletop and feeding her while trying to calm an irate Maddox at the same time which she and Jen found incredibly amusing for some reason (though I think they were secretly impressed too…or at least that’s what I’m telling myself).

The last few days I spent all over the place: one night in Monroe, one with the Traylors, one with Jenna & Jeff, and one with the Dixons. After a great sending-off meal in a Jazz café downtown with the Dixons and some of their friends whom I’d got to know, the journey home was actually very relaxed. I quite enjoy travelling on my own because it means not having to coordinate with anyone else. Arriving very early in New Orleans and due to the ticket changes (it was fun to hand over an envelope with $200 in cash) I ended up spending a number of hours wandering around airports.

So I’m now back home and unsuccessfully attempting to settle in. Mostly everything’s right where I left it, but I’m missing certain people rather a lot… 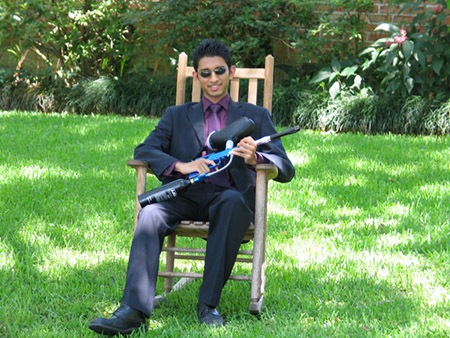 Caleb was kind enough to offer me a ride up to Monroe as Dwain and Manel were keen for me to spend another week with them. Whilst Caleb is a good driver, he’s known for his penchant for “loose interpretation” of speed limits. He’s certainly not reckless, but given the speeds involved, he’s not entirely safe either. Well, today was going to be a trip to remember as we were pulled over for speeding. Just a bit. 75mph in 45mph zone is what he was written up for. And let’s just say his “top speed” was a little higher…

I couldn’t be mad at him, obviously, since he was doing me a favour, and he handled himself well with the officer who offered to throw him in jail. I guess he kind of figured that getting caught was something that happened to other people. Really, he knew it was inevitable that it would happen eventually and accepted that it was better sooner than later because it’ll slow him down for a good long while. Although he couldn’t quite help letting all his friends know about the ticket. Hey, I slowed him down at least once, so my conscience is clean!

Anyway, this was certainly not his week. While we had a few good days, watching a bunch of movies at the cinema ($2 matinée tickets rule, although I still maintain their mall cinema is a “glorified TV screen”) and despite the fact he’s slowed down hugely since getting the ticket, he got into a wreck after not breaking early enough and hydroplaning after a bad night of rain. It wasn’t bad and no one was injured, but the front of the car suffered so he couldn’t take me back down to Baton Rouge as intended…resulting in my first ever trip on the Greyhound bus system. They’re really coaches rather than buses, and while Manel’s stern warnings implied that it was only used by the dregs of society, the 6-hour trip was remarkably pleasant although the last leg (I used three different coaches in total) was rather crowded.

This is intended to cover something that was missed in previous entries…
I was lucky in meeting Mr Pugh, a retired lawyer and ex-professor at LSU for whom Jenna has been working, as it was not arranged by me at all. He had apparently expressed some interest in meeting me after she explained that I was visiting, working, and would be studying Law at Cambridge this year. And I, of course, jumped at the chance of a relaxed afternoon of intelligent conversation.

Although he seemed to want me to do most of the talking, Mr Pugh was certainly full of questions for me about my views on the States and its current situation, along with differences from Britain. I answered his questions as best I could, and was pleased to find he was rather liberal which made it much easier to justify certain statements I made. I suppose with age and experience one either sees the flaws of the country or becomes blinded to them. Perhaps because of his line of work, he seemed very aware of the shortcomings, but was interested to hear that many were also evident in the U.K. too.

You can always tell a conversation is going well when you are offered tea, and you can always tell your company is really being enjoyed when they crack open the wine! It was going to be a long afternoon of discussion, which was fine with me. I think Jenna was really content to just listen intently as we discussed everything from politics and religion to education and lifestyles. I savoured the almost interview-intensity of it, having to careful support my opinions with evidence while politely arguing certain points. Accompanied by a serious lightning storm around us (we were sat in a covered outdoor porch) the mood was certainly electric. A little too much, in fact, so after watching Jen jump at some particularly loud thunderclaps, we retreated inside before eventually taking our leave. A most memorable afternoon, and Mr Pugh also mentioned he knows another retired Law tutor who lives in Cambridge and suggested I visit him. And that will, no doubt, be an entry of its own… 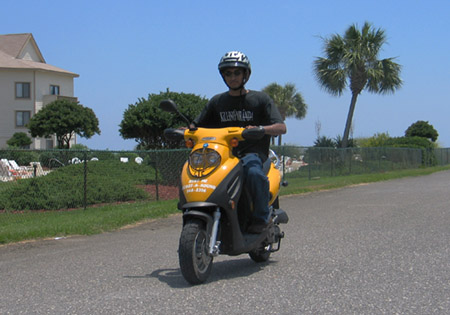 Unfortunately we only discovered the scooter hire place once most of the others had left, but nonetheless it was great fun taking them for a spin. Debbie and Steve had done this before, but I was something of a virgin at this biker lark. It was fairly easy to pick up once you got the hang of starting the damn things, and they were pretty zippy too, although I didn’t really care to push them to their limits. We were driving them around inside the hotel grounds so that later on I was chatting to some kids who asked whether I was “the guy with the bikes”. Not a bad rep to gain on my first day as a biker!

Having sorted details out with my parents, I have now managed to extend my trip for a further two weeks. The airline are charging me nearly $200 for the privilege, so this may well be the most expensive two weeks of my life given that’s the charge for simply existing here! Nonetheless, it will be great to spend more time with Jen, and I’ll be living with her, Jeff and Karleigh for a while, as well as probably taking another trip up to Monroe before I leave.

Stephen has nearly finished Fast Food Nation, a pretty a scathing book on the practices and secrets of the fast food corporations, as well as the health effects of this diet on the population. He has been reading this for much of the time we were out here, and has been quoting the more damning (sickening?) passages to us on a regular basis. The thing is, sickening as it may be to hear about, it’s often just cheaper and more convenient to eat fast food, so I don’t think it’s going to stop us at all… 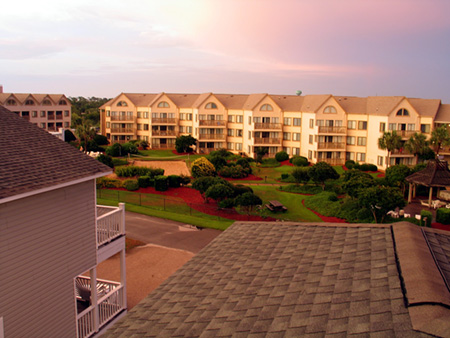 I still maintain that Britain has no beaches, just a coastline, and this place reinforces that belief. Now, I’m no fan of the beach. I tend to stay out of the sun for the most part, don’t really like the water, and don’t even get me started on the incredibly flawed design of sand; it just gets everywhere and you’ll still be washing it out of your hair for days afterwards…even if your head never touched the sand!

However, so far this holiday within a holiday has been incredibly relaxing and laid-back. Jeff shares my general distaste for the beach so we keep each other company reasonably well (although he left early). Karleigh is still a little young to enjoy the beach properly, but she loves the shallow toddler pool and has a very cool inflatable boat in which she can sit and paddle; Jen and I have taken her a couple of times now. The hotel grounds are beautiful as you can see, and the seaside sunset skies are incredible. Everything is comfortable (even when sleeping on the floor for the first few nights) and now that a few of the others have left, I’m just sharing the condo with Jenna and Alexis who are great fun as roommates. 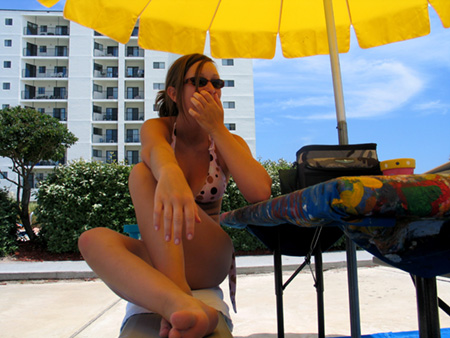 It’s easy to start chatting with anyone out here (arguably aided by my British accent which is an immediate talking point) and everyone’s pretty friendly. The Gulf Shores are the cleanest and generally nicest beaches near here, so they attract people from all the neighbouring States (I’m currently in Alabama). Holidays like this also tend to bring out everyone’s eccentricities, like Stephen’s discovery of the shuffleboard (at which I’m happy to say I rule!) on the grounds; the game is sort of a cross between curling and boules. And of course, Manel came equipped with bottles and bottles of factor 50 sunblock. It’s an impressive arsenal when you see it piled together. I’ve never quite trusted that stuff: can it really be healthy to coat your skin with that gunk!? I’ll just stick to the shadows and stay sunblock free thankyouverymuch.

Unfortunately Jen and Alexis are heading back early, so I’ll have the condo to myself for a few days. I will miss them, especially as I’ve had some problems back home with trying to extend my stay here by a few weeks (since I’ve been working most of the time, it would be nice to have a little more than just the one week’s holiday). The irritating this is that I’m sure if it were anyone else, they’d be calling back home to ask for money. I’m just asking them to send some of my money so that I can sort out the plane tickets. Things have yet to be resolved.