Yesterday was officially my last day of work out here. It was a low-key end to a most enjoyable stint. But I certainly got to celebrate it in style… 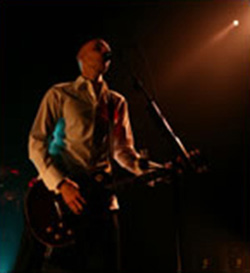 Taking the afternoon off work, I headed down to New Orleans with Jeff, Jenna and Caleb (who had come from Monroe). Our destination was the University of New Orleans where the evening’s entertainment was provided by none other than A Perfect Circle! In a way I envied Jenna and Caleb who were being treated to an amazing first gig experience (although I can’t really complain, having gotten to see Maiden at my first one!) We had floor tickets in the large arena which allowed us to work our way far closer during the fairly decent opening act, The Burning Brides, than I had hoped to get.

It really was everything one could hope for from the band, with a longish set encompassing the majority of their two albums. Maynard was reasonably talkative, joking around occassionally and teasing Jeordie about his Marilyn Manson roots as he introduced the rest of the band and then, “Jeordie – who? – Jeordie White – who? – Twiggy Ramirez – ohh.” Indeed, he did his best to embarass the poor chap since he used to live in New Orleans, culminating in a Jeordie-sung solo rendition of Will Ferrel-inspired “Fred’s Got Slacks”. 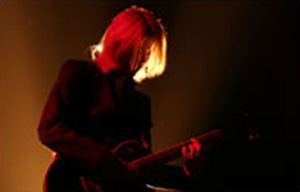 The stage presence of the band is indescribable, above all James Iha, now sporting stunning long white hair, who just oozes unbelievable coolness without ever saying a word. The lighting was fantastic, especially the effect with layered silhouettes of Maynard during the first song, combined with a stage set comprising of eerie metal-twisted trees that strongly (strangely?) reminded me of coathanger sculptures.

So now, the morning after, I am as sore and raw-throated as ever, but could not possibly have asked for a better experience. Almost makes me glad I missed them back home since I got to share in Jenna and Caleb’s first experience. It was very cute to see Jen start bubbling the way she does this morning, and it took me a second to realise that it was the first time she’d heard a song by the band after the concert and so she was getting to hear the weird fusion of the studio version with her mind playing back her gig memory. The expression on her face certainly took me back.

When I started working out here I was given a fresh yellow legal pad, and also seem to have acquired another since then. At any rate, I have never been without at least one of them when in Court or scurrying about outside. During the quieter moments however, they inevitably led to the odd bit of sketching or doodling, and I thought I’d let you peek at a selection here… 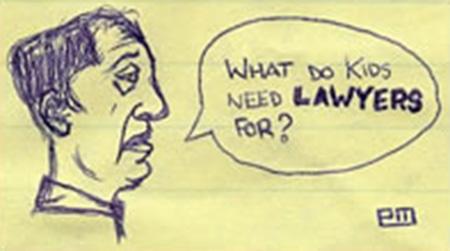 One of the biggest problems we face in regard to the views of those who create legislation is the idea that children should not require lawyers at all, and that our role in defending them is simply to drag out what should be a simple proceeding. The fact is that the process is far from simple and it is plain to anyone who has set foot in a juvenile court that even with a lawyer, children often find it difficult to follow what is happening to them. I was involved in coordinating a group of Steve’s university students at the State Legislature where we were giving testimony in support of a bill that would prevent juveniles from waiving their right to counsel. This is crucial because so many children effectively have this right waived on their behalf through pressure from judges, prosecution attorneys (who unsurprisingly would just love for there to be no opposing lawyer!) and even parents. 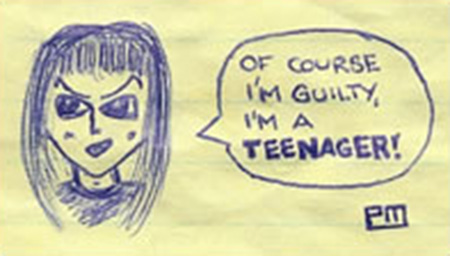 Another prejudice we commonly find is that the majority of our clients must be guilty because, well, they’re teenagers. And you know what teenagers are like. The result is that there’s a feeling that we’re just wasting people’s time by even attempting to defend these people. Indeed, when explaining that our standard process involved a “not guilty” plea during a discussion about the lack of funding for the juvenile public defenders office, Steve met with the response, “Ah, well there’s your problem: you’re pleaing not guilty!” 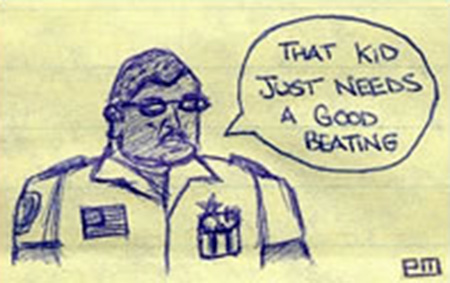 It’s not uncommon to hear this casual remark from the security officers. It seems innocent enough, and maybe even quite astute. But so often from having spoken with the child previously in the office, we’d really like to say, “Well, actually you really don’t have to worry about that, this kid’s getting beaten plenty!” Corporal punishment may be all well and good, but interesting to note that these days the majority of supporters are people who were not even beaten regularly, let alone excessively. And frankly, there’s a number of our kids who’ve been screwed up by the “disciplining” they receive. Younger kids tend either to get traumatised or become more aggressive and violent towards other children, while if this form of punishment continues, eventually the child is big enough to hit back, and it’s hard for a parents to deal with by that point in what is usually a pretty dysfunctional relationship. 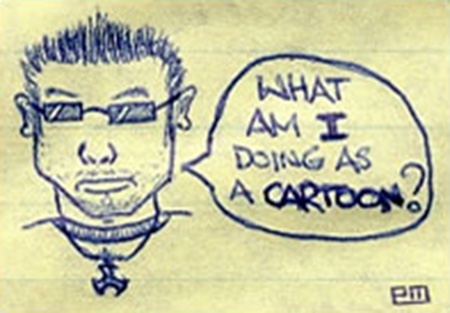