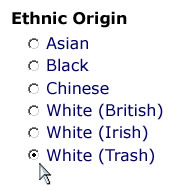 You know that you’ve been filling in too many application forms when you find yourself accidentally stating your name, date of birth, address, phone number and ethnicity to people. Especially when the question was “how are you?” I’m also less than enthusiastic about a certain firm who chose to ask, “by reference to other careers explain why law would be your chosen career,” which as far as I can tell translates into, “tell us why we’re great and everyone else sucks.” Not that they’re wrong; it’s just tacky.

A while ago I mentioned Prison Break. For those of you with television sets (and the fewer still who get decent Channel 5 reception) it’s starting on the 23rd and 24th. For everyone else, I’ll share another show I was recommended at the end of last term and have just started watching: Sleeper Cell. It was described to me as a more adult 24. It is produced by Showtime but unfortunately their site unhelpfully blocks connections from outside of the US (and frankly I don’t think it’s worth the effort of using a Stateside proxy server). I certainly hope that’s for marketing reasons and not executive paranoia. Nevertheless, the show itself is worth watching, with a serious dose of international terrorism grounded in the human interaction within one of these much-feared sleeper cells. I’d rather not give much more away, but it did once more make me want to read the Qur’an fully, which is something I’ve always intended to do. Interestingly I discovered that in America, requests for free copies of the Islamic Holy Book shot up after 9/11 as many people were keen to discover the motivations of the terrorists involved. I certainly respect that reaction (rather than the more stereotypical “let’s bomb the bastards” response), although I’m not convinced the answer is actually in there — at least no more than the Crusades can be explained by reference to the Bible.