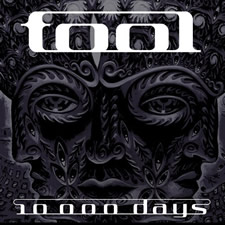 Tool‘s forthcoming album 10,000 Days leaked two days ago. Don’t ask me where to obtain it, I haven’t looked. I remain optimistic that despite the leak fans will still be flocking to buy the album on its release at the beginning of May, exactly 5 years after Lateralus. I myself have already pre-ordered a copy (music, unlike movies and videogames, can actually be a lot cheaper when preordered online, often becoming more expensive later if successful). When a band create sufficient goodwill coupled with a reputation for producing albums of a consistently high quality, people are more than happy to hand over their cash. I won’t pay for a CD that contains a few good songs amidst mediocre filler, but I trust Tool to deliver the high aural quality I expect. That’s rare given the current state of the music industry — the last album I was confident enough to preorder was A Perfect Circle‘s eMOTIVe. I guess there’s something about knowing Maynard James Keenan is involved in the process that just puts me at ease.

The official site has been updated with a teaser introduction featuring music from the opener and first single Vicarious. I am tempted to obtain the single to whet my appetite before the album’s release but am actually quite happy to avoid the low quality leaked MP3’s until I hold the CD in my hands in a little over a week. Interestingly, despite the band being American, the US release date is later than the rest of the world, a full day behind the UK release which is itself a few days after several European countries.

What Would Tyler Durden Do?