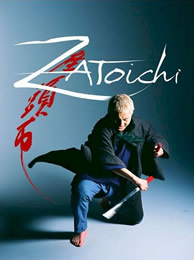 In his first period piece, Takeshi Kitano turns to the old Japanese legend of Zatoichi, a blind swordsman who was the subject of a series of films spanning over two decades, starting back in 1962. Embracing his source material, but fulling integrating it with his own unique style, Kitano has crafted an evocative work and compelling tale, a modern Japanese samurai classic.

Set in 19th century Japan, Zatoichi [Takeshi Kitano] is a blind masseur who arrives in a remote mountain town. Here he discovers the Ginzo gang are terrorizing the locals with extortionate protection fees, aided by a skilled samurai ronin, Hattori [Tadanobu Asano]. After befriending unlucky gambler Shinkichi [Guadalcanal Taka], he meets two geisha who have sworn to avenge the deaths of the parents. With an inevitable confrontation, Zatoichi must aid them and take on the powerful gang. 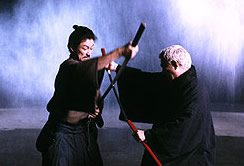 Like Tarantino’s recent Kill Bill, the film is extremely stylish, with incredible care taken over each stunning set piece, but that is really where similarities end. There has been much discussion on the choice of (cheaply) digitally rendered blood effects in the action sequences, rather than traditional fake blood (in utter contrast to Tarantino who had gallons of various hues mixed to achieve precisely the look he desired). While the gore appears somewhat cartoonish as a result, not staining clothes for example, the overall effect actually appears to complement the style of the film, since after each thrust the blood seems to hang for a moment in the air before dropping. Another major difference is the way the director treats the katana with great dignity and respect, whereas Tarantino chose to turn the sword into something far more brutal (attracting some criticism).

Kitano has taken the stunning attention to detail from last film, Dolls, but his vehicle here is a far less sluggish tale, paced better like his earlier Yakuza efforts. Zatoichi himself is a brilliantly cool and unhurried hero who appears always in total control, played in traditional Kitano Hana-bi style, a subdued personality that suddenly emerges confrontations. The violence occurs in his traditionally short and sudden bursts, often gory but not purely gratuitous, and he also includes a few trademark scenes where the violence occurs outside of the frame. Finally, he weaves in the expected (and decidedly strange) humour in the style of Sonatine, and as such, Zatoichi is very much a culmination of his previous films, taking lessons from each one. 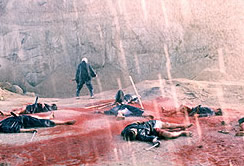 There are a number of interesting quirks here, some of which work and some of which are a little distracting. Zatoichi’s hair, dyed blonde amidst the mass of dark haired characters, is never explained. But attracting far more discussion are the peasant interludes. These rhythmic scenes are carefully composed and choreographed, slowly building up to the astounding tap dance finale. While this has been ridiculed by some as being utterly incongruous with the rest of the film, in fact it brings in an often overlooked element. These sequences represent the village’s way of life that Zatoichi is struggling to protect from the stifling gang that threatens to destroy it. The colourful ensemble closing may be a little strange, especially in its inclusion of several main cast members (and the geisha at two different ages), but clearly shows his success in preserving it. So often in revenge films our heroes are given no other motive for their killing than being solely blinded by their quest for vengeance, so it is refreshing to find something deeper in Zatoichi.

The film may be a little too choppy for some people, although it is always coherent. The creative editing particularly shines as the Geisha tell the story of their past and we are greeted to the same wonderfully poised dance performed by one character as an adult and as a child. The combination of styles will also be difficult for some to swallow, being in parts historical epic (the look of which Kitano achieves flawlessly), period drama, martial arts movie, slapstick comedy, and of course, dance extravaganza! However, the result is something deliciously Japanese, and as the director further evades predictions as to the direction of his career, very very Kitano.