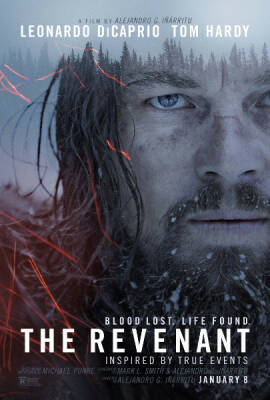 As long as you can still grab a breath, you fight.
You breathe. Keep breathing.

In 1820s America, a party of trappers heads home through unforgiving territory after a savage attack by the native population.  When Hugh Glass [Leonard DiCaprio] survives being mauled by a bear, two of the party agree to stay behind with Glass and his son. John Fitzgerald [Tom Hardy] convinces the impressionable young Bridger [Will Poulter]  that to survive the pair should leave Glass for dead. Glass refuses to die and battles both nature and man to seek his revenge. 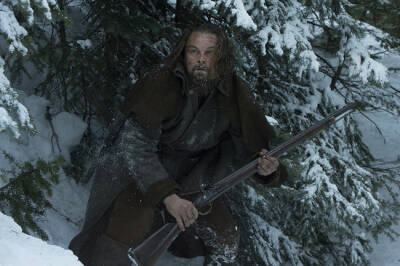 It is unsurprising that a gulf has emerged between The Revenant’s warm critical reception and the decidedly mixed view of filmgoers. The creation of this film, shot on location in the wilds of Canada and Argentina using only natural light, is a clearly arduous endeavour. This reliance on natural light captures images that are at times almost otherworldly, but required long, unbroken takes out of necessity due to the limited available time rather than as an artificial conceit in Iñárritu’s last endeavour, the Oscar-winning Birdman. Tricks learned then, allowing for flowing camera movement, are at play here with the camera often circling characters to allow us a 360-degree view of their environment.

The harshness of that environment is very real and Iñárritu clearly put his actors through a great deal. However, the response to this is mixed with the film being derided by some as simply “pain porn”, finding entertainment in that discomfort. Iñárritu has stated that he wanted to take on the challenge of such environments to give people a reason to come to the cinema, and the reality of the experience was crucial to achieve something worthy of this. He has, for example, been coy about how the visceral sequence in which DiCaprio is mauled by a bear was actually shot. Whilst such verisimilitude may seem a noble ideal, it somewhat misses the point of cinema which is, at its core, a lie. Moreover, it does not explain the dream sequences that recur throughout the film. 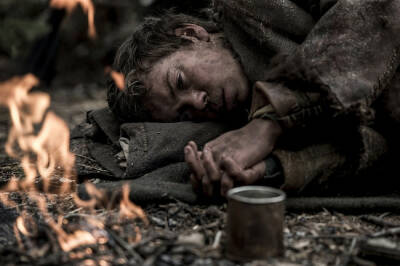 The real issue is what the film achieves beyond the authenticity of its depiction of wilderness survival. The chief complaint is that there is little story or indeed content at all beyond throwing one hardship after another at the protagonist. The most basic of revenge setups is essentially the entire story. The relentlessness traversal is reminiscent of Apocalyptico’s incredible final act, a 45-minute chase through the jungle. However, Apocalyptico earned its audience’s attention through first constructing a tense situation with characters to whom we could relate. Perhaps the only fully realised character in The Revenant is the conflicted Bridger, taking Poulter a long way from his School of Comedy roots. DiCaprio and Hardy both turn in solid performances, but there is limited depth available for them to draw upon. Whilst DiCaprio may deserve an Oscar for his body of work, The Revenant does not showcase his range.

Of particular note is a close-quarters fight scene towards the end of the film. I do not think we have ever seen so brutal a fight shot up close in a continuous take in a mainstream film. Even martial arts films tend to choreograph around a corridor with one fighter taking on a string of enemies who drop out of frame. Even this late in the film The Revenant is capable of presenting something visceral, fresh and new.

I am conflicted in assessing the film, since I am indeed a fan of the film making process. The impressive technical marvels achieved are fascinating along with the clearly arduous process to which the cast and crew subjected themselves. However, taken as a whole, the point of this endeavour remains exasperatingly intangible.