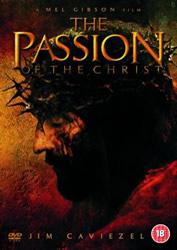 Bloody and controversial, Mel Gibson’s The Passion of the Christ isn’t exactly what one would expect of a Biblical drama, but his deeply personal and profoundly moving film is certainly epic both visually and emotionally. Using “passion” in the original sense of suffering Gibson does not let his audience off lightly with his horrifically realistic depictions of Christ’s torment.

The story should be familiar to viewers, following the last few hours of Jesus’ [Jim Caviezel] life on Earth. Beginning with His agony in the Garden of Gethsemane, we witness Jesus’ betrayal by His own disciple, arrest and trial by Caiaphas [Mattia Sbragia] and the Jewish leaders, subsequent investigation by Roman governer Pontius Pilate [Hristo Shopov], violent scourging and finally His crucifixation and death. Interspersed are flashbacks to moments from his earlier life and ministry.

Undoubtedly everyone who sees The Passion will take home their own haunting images, and most shocking of all is the flogging sequence. In part this is due to the fact it is often overlooked in favour of the crucifixation, whereas in fact it is far more brutal. With terrifying realism we watch as Caviezel’s Christ is beaten and then whipped till His skin is torn and His back is a shredded pulp. It comes as something of a relief then that Jesus wears a tunic while carrying the Cross, else being forced to look at His ripped and ruined flesh for that length of time may well have become unbearable. Most amazing is Caviezel’s astoundingly empathic performance; bowed and broken we can still feel the love in his eyes and the divinity in the way he carries himself. Morganstern and Bellucci are equally magnificent in imbuing their performances with real character behind the floods of tears. Mary is at times more moving to watch than Jesus, painted in a devastatingly tragic light as a mother who is forced to see her son suffer with no way to ease his pain.

Fortunately the accusations of anti-Semitism are unfounded, and really constitute a poor attack from those who were determined not to like the film. While clearly the Jewish leaders are portrayed as the ones who condemned Jesus, this is a film with a cast composed almost entirely of villains. The wickedly laughing Roman soldiers are shown every bit as harshly while they torture Christ. And the good Jews are all clearly evident too, with Mary Magdalene, Luke and of course Jesus’ Mother Mary all at the foot of the Cross. In addition there are two of the Sanhedrin who defend Jesus, and Veronica who aids him as he bears his Cross, and the women of Jesus followers weeping as they watch, all given screen time and shown fairly. While Pilate’s inner struggle and desire to avoid an uprising is clearly portrayed, Caiaphas is shown as unswerving in his views. While this may seem unfair, it really (if inadvertantly) holds a warning about blindly following a spiritual leader of such unquestioning conviction in any religion.

It must be remembered that The Passion is primarily a visual film as allegedly the director only included subtitles to the fully Aramaic and Latin dialogue as an afterthought; the right decision, certainly, for a film that is already less than accessible. While much of the imagery is very obvious, the occassionaly visual subtleties are nice, such the imprint left on Veronica’s Veil which we only see for a few moments in the background of shot, rather than the all-too-easy dramatic close-up. But again the problem is that this expects a detailed knowledge of the story else such things will be wasted. Other images can also be more confusing than evocative. For example, there are some excellent shots of a beautiful androgynous Satan wandering through the crowds but their message seems muddled. At one point his gaze locks with Mary’s and the two adversaries seem like opposing equivalents. In another more clouded appearance he holds a grotesquely grinning child, perhaps taunting Jesus as if to say that even he would protect his own child. The lack of clarity may of course simply be an indication that these elements are purely visual additions. Similarly the overuse of the slow motion effect, beginning with Judas catching his money, and then every subsequent dramatic sequence including the numerous occassions on which Jesus collapses, serves to reduce its powerfulness rather than increase it.

Some critics will argue The Passion is flawed in focusing too much on Jesus’ final hours with not enough of the man himself or his early life. In truth this focus was an intentional step in order to avoid simply creating another Biblical epic rehashing. The result is infinitely more harrowing but also refreshingly new. Due to the expectation of a working knowledge of events, it is really only Christians who will find this moving rather than slightly disturbing (especially in the modern world of film where we are almost numbed to much violence anyway) because each sting of the whip, each bloody footstep under the heavy burden of the Cross, represents the price of our sin. Yet it is to his credit that Gibson ends the film without dragging on unduly, and manages to offer his audience a final redemptive glimpse of hope in the closing image of Christ as the heroic saviour He is.