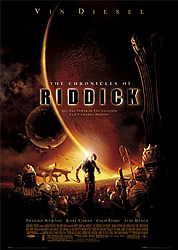 After Pitch Black became a surprise hit, Twohy found himself with the opportunity to return to his anti-hero survivor Riddick with a considerably increased budget. The result is a visual feast of action and effects with galaxy-spanning scope, but while the writer-director clearly understands the entirity of his ambitious creation, how much of it translates to the screen?

Five years on from the events of Pitch Black, Riddick [Vin Diesel] is still running from bounty hunters. They lead him back to old friend Inam who has discovered from an Elemental’s prophecy that Riddick may be the only one capable of stopping the seemingly invincible invading force of Necromongers, led by Lord Marshall [Colm Feore]. After discovering the girl, now calling herself Kyra [Alexa Davalos], he rescued in the previous film is now incarcerated on a penal planet, Riddick attempts a daring breakout before reluctantly taking on the role of hero to battle the Necromongers.

From the opening battle with the mercenary bounty hunters, Riddick is an adrenaline rush of tense fights, and this thundering pace rarely lets up throughout the film. The result is, of course, that occassions for development of both character and plot are few and far between. Nevertheless, the action is well choreographed and reasonably varied with moody use of darkness that keeps the tone as grim as the lead character. That said, the half-lighting techniques when combined with choppy camera cuts does become disorienting, making it exceedingly difficult (and at times irritatingly impossible) to follow some fights at all. But Riddick’s deadly accuracy and ruthless efficiency makes him a joy to watch at work. 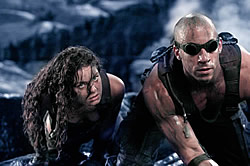 Most striking about Riddick is the visual depth. Twohy’s attention to detail is immediately evident as he paints a series of otherworldly planets with coherent cultures and background mythologies, and undoubtedly he has the universe mapped out in even greater detail than we are shown. This is continued in the cinematography which uses contrasting lighting schemes to make each planet feel different, along with a variety of colour filters to represent mood changes. And yet all this care is equally matched and undermined by the utter incoherency of the plot, coupled with gaping holes of missing information such as the background to the Furyans or the Elementals.

Vin Diesal growls and scowls magnificently in his role, capable yet reluctant, generally uncaring although a little humanity is drawn out through Kyra. Davalos’ Kyra is sensual but untamed and deadly, having inherited much of her mentor’s cynicism, and importantly allows the audience to connect in some way with Riddick. However, other well-designed characters are left as mere sketches such as Judi Dench’s Aereon, a member of the enlightened ethereals known as the Elementals. Her character is introduced in an interesting fashion and then misplaced for the majority of the film. Similarly Newton, as the wife of Necromonger Vaako [Karl Urban], is alluringly evil but is given little to do. Nor is there any believable chemistry between her and Urban. Had the action sequences on Crematoria – which is utterly irrelevent to the main Necromonger plot – been cut back, there could have been ample time to flesh out these characters and delve further into the missing background elements. 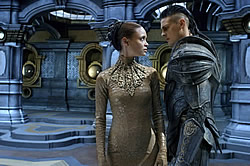 But most unforgivable are the the purely nonsensical notions displayed in this film. Riddick, for example, proceeds to remove his goggles to reveal his silver surfaced eyes purely to increase the tension at appropriate moments, regardless of whether it is bright or dark. When the gang run across the surface of Crematoria, the creeping sunrise appears to increase the temperature instantaneously to the daytime 700 degrees, although should you get caught in it, apparently a little shade or a splash water will more than suffice…

Twohy’s passion for the material is clear, as is the care that has gone into crafting the world and its mythology. Perhaps we are supposed to forgive the lack of focus and sparse and forgettable dialogue because we’re enjoying the computer-game action (incidentally the accompanying videogame has received surprisingly impressive reviews – and perhaps this is revealing about the movie’s problems). Perhaps the considerably flawed storyline will be mended by the intended sequels (this was written as the first in a trilogy, and the closing implies a clear intention of a follow-up) but in honesty, Riddick has simply not earned that future. Whether its undeniably lush visuals manage to garner the necessary financial success, however, remains to be seen.