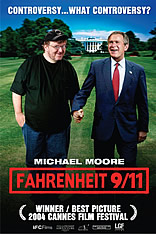 Michael Moore’s scathing documentary against the Bush administration and its corruption had garnered much publicity and controversy even before opening, through the battle between Disney and Miramax over its release, and receiving a Palme d’Or from the Cannes Film Festival.

Far more wide-ranging in its subject matter than its title would suggest, Fahrenheit 9/11 (that’s Celsius -1715/99 for those of us in metric) is an all-out attack on the entirity of Bush’s presidency from the controversial election “win” all the way through to the ongoing war in Iraq. In between he takes a look at Bush’s past, the response to the titular terrorist attack, and the war in Afghanistan, as well as Bush’s personal links with leading Saudis.

While it features some amusing and typically Moore moments such as stopping senators and asking them to send their children to Iraq (one of the film’s best laughs came from the subsequent utterly confused expression of one senator), he also manages to shoot himself in the foot though his sarcasm. Cheekily humourous as the opening may be, his jibes at the rigging of the Florida election will alienate many of those he seeks to convert before his real message is under way. He has documented this well in his books, but here there is only implication without any of the easily accessible figures to back it up. A grave mistake that will undoubtedly affect how it is received by on-the-fence Republicans in the U.S.A. 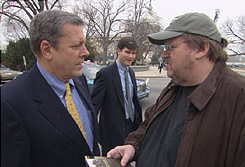 However, it is fortunate that he does this at the beginning. For the last hour of this revealing documentary (not so much an exposé as some would claim – very little here is a genuinely new revelation) Moore keeps the images pumping so hard that every audience member should leave feeling not just angry but cheated and abused by such a regime that claims to be safeguarding democracy worldwide. Moore often runs too long on some tangents like Bush’s links with the Saudi royal family, and the fact the Bin Laden family were flown out of the country while all other flights were grounded after the attack (a good point, but overstressed). Elsewhere he does even mention that fact that the censoring of a name on the public release of Bush’s service record may simply have been an attempt to protect a friend, rather than covering the surprising paper-trail Moore discovers. Equally though he does not go overboard, reminding us for example that the Carlyle Group (who generally prefer to hide behind subsidiary company names) are not about a conspiracy to take over the world, but just making money, and a lot of it.

Having said much is not new, it is the delivery that makes this great fun as well as insightful. There are a few notable scenes which will be remembered for a long time. Above all is the shot of President Bush sitting in an elementary school for seven minutes after being told that the nation is under attack. Sure, everyone knew where he was on September 11th, but only Moore thought to write to the teacher who had made her own recording of the President’s visit. Unable to respond without advisors at his side, he continues to sit and read My Pet Goat for nearly seven minutes with an utterly dazed expression on his face. That is not the sort of man anyone wants leading their country, and Moore milks every second. 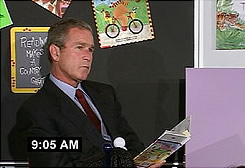 Pandering slightly to American sensibilities, Moore uses an empty screen with screams of shock and grief to represent the attack on the twin towers, then showing images of the aftermath. In truth it is almost more powerful this way as we don’t need to see the planes crash again for it is burned into our memory, and he achieves great effect through never showing the towers themselves, just people with necks craned upward to look. In a wonderful piece of editing, Moore uses footage of soldiers discussing the music they’ve wired their tanks to play, and then shows montages of Iraqi war footage to the sound of those very same rock songs. It’s disturbing to say the least.

The film really comes into its own upon entering Iraq. We see footage of both American soldiers and Iraqi civilians, maimed and cursing America for it. Moore managed to get a series of film crews accompanying the military by disguising the fact they were actually “Michael Moore film crews” and the results are impressive. The most interesting running feature is through Lila Lipscomb, mother of a young soldier in Iraq who is shown at first very pro-war until her son is killed. She is then shown reading in anguish the last letter sent by her son in which he begs them to work for Bush’s removal. And finally she makes a cathartic trip to pour out her anger and feelings of betrayal at the White House. It is undoubtedly moving, although due to Moore’s reputation one does wonder whether this was all genuine or (at least in part) slightly staged. Or perhaps he was genuinely just lucky enough to have interviewed her before her son’s death so we could witness the change.

There is definite clumsiness in Moore’s tirade too. He suggests, for example, both that the war in Afghanistan was wrong, but also that there should have been more troops flooding in to catch Bin Laden which would undoubtedly have resulted in worse violations against innocent Afghans. The shot of Bush on a golf course joking with the press is momentarily amusing but has no depth. With other presidents it would have been used to highlight their charm or composure. His somewhat unrealistic depiction of pre-war Iraq shows that things were not dire for the people, but is still somewhat misinformative, ignoring the suffering of many individuals. And while his frustration with the lack of Democrat opposition is palpable (especially regarding the election where no senator would aid the objectors) he offers little real criticism.

Scored superbly evocatively by Jeff Gibbs and well edited together by a more mature and less ego-driven Michael Moore who no longer feels the need to be constantly in front of camera (here things work best when he is not, and only occassionally adding commentary), Fahrenheit 9/11 will unfortunately alienate many of those it aims to convert through the opening reel, but those who can see past this will have a difficult time leaving the cinema feeling pro-Bush. It is difficult to feel anything but enraged as he lets the administration hang itself through a stream of definite statements about the threat posed by Iraq which is now known to be utterly false. Unfortunately for British viewers, there is little criticism of Blair’s actions, aside from a hilarious Magnificent Seven pastiche. Less amusing and less focused than his previous outings through his more sober attitude here, Moore still manages to entertain his audience and produces one of the most watchable politically motivated documentaries in a long while.