“You know, there’s a saying: God always corrects one pope by presenting the world with another pope. I should… I’d like to see my correction.”

Although the script seems entirely speculative, in the measured hands of Hopkins and Pryce, the private conversations between Pope Benedict and Pope Francis feel both intimate and believable. These are two intelligent men with deeply divided views on the future of the Catholic Church: one a traditionalist and one a reformist (at least relatively speaking). Despite the title, The Two Popes is focused firmly on Pope Francis — still Cardinal Jorge Bergoglio for the majority of the film — and we see Pope Benedict largely through his eyes. The film skirts around the accusations that Pope Benedict’s resignation was linked to knowledge of the Church concealing abuse, though perhaps the lack of resolution itself speaks volumes. Ultimately The Two Popes is more focused on how its two very different characters come to understand one another, if not actually agree.

“You think explaining explains anything?”

In a week that saw the death of one Python, it was wonderful to see another’s dream finally realised. After (at least) 25 years Terry Gilliam’s take on Don Quixote, inspired by Cervantes’ novel principally by the titular character, will finally reach a wide audience this year, having been shown at Cannes in 2018. His ill-fated shoot with Johnny Depp is captured in the 2002 documentary Lost in La Mancha, and the new film is dedicated to Jean Rochefort and John Hurt, both previously cast as Quixote but who died before the film could be made. Suffice to say, Don Quixote carries significant baggage. In the script that emerged, Gilliams deftly translates the novel’s themes of the power and danger in fantasy from the medium of books to filmmaking, as a man is consumed by a role he played a decade ago while a girl is seduced by the idea she could be a star. Adam Driver is excellent as Toby, a dissatisfied director returning to rural Spain where he once shot a student film and witnessing the impact left behind. Jonathan Pryce spent years lobbying for the role of Quixote and dons the armour made for Rochefort with aplomb, bringing a sense of guileless innocence to the role. Whilst most of the women are under-served by the script, Joana Ribeiro’s Angelica is more nuanced: her dream may have crumbled in contact with reality with trite predictability but she owns her choices even if she has regrets; Toby’s guilt seeks to rob her of agency. Gilliams’ skill has always lain in occupying the inchoate space where fantasy and reality merge at the edges so his obsession with Quixote is understandable. Perhaps fittingly for a film about the dangers of fantasy, it is the full-blown dream sequences that feel like an unnecessary confusion. The Man Who Killed Don Quixote may not be an unqualified triumph but it is a joy to watch ⁠— at last the curse is lifted and this quest is complete. 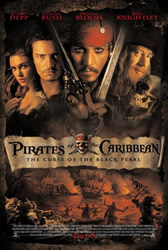 Quite frankly I was horrified at the though of Disney cashing in by taking a genre (and worse still, a theme park ride) that has already been done to death, and just pouring a massive budget into a movie. Well, I’m now quite happy to swallow down every bad word and thought I previously held regarding Pirates as the film that restored my faith in over-the-top blockbusters after a disastrous summer of cinema. While the story itself is all good-natured fun, it’s is undeniably Depp’s incredible charismatic performance that both steals the show and raises the film to a different level.

Jack Sparrow [Johnny Depp] is a roguish scoundral arrested for his lifelong series of crimes and threatened with execution. But after another band of plundering pirates ransack the town and kidnap the governor’s beautiful daughter Elizabeth [Keira Knightley], Jack finds himself liberated by his former captor, apprentice blacksmith Will Turner [Orlando Bloom] who needs Sparrow’s help to steal a ship and rescue his true love…

Verbinski’s direction always oozes atmosphere, genuinely creepy in parts but deftly lightening the tone with humour that keeps the film suitable for children, although not the very youngest. This atmosphere is hugely assisted by the film’s memorable soundtrack and beautiful cinematography, and of course the occassional snippets from the ride’s anthem, “Yo ho! Yo ho! A pirate’s life for me!” 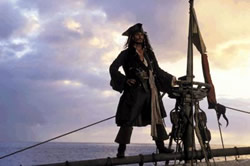 The acting is all up to par, although some performances are certainly more noteworthy than others. Orlando Bloom’s hero wins over the audience to begin with, but is never terribly charismatic, especially since he is so often placed alongside Depp. Meanwhile Keira Knightly looks suitably stunning, but rather than smouldering in her role, her love for Will Turner is so rigidly and reservedly portrayed that it is never really believable that he would go through such peril for her. That said, her strange scene on the island with Sparrow does change our previous perception as she loosens up. Geoffrey Rush overplays his role as pirate captain with relish and produces and astoundingly intimidating performance.

But of course the star is always Depp’s Jack Sparrow. Whether he’s the swashbuckling action hero or stepping off a sinking ship (one of the finest character entrances I can remember) it is impossible not to love him. He embraces the role so fully that even when just walking he makes the role entirely his own (as my cousin tactfully pointed out, only Depp could walk quite like that without coming off as gay!). If anything he’s almost too good, as even in the opening when we should side with Turner, we never really want Jack to get caught. An impossible-to-dislike anti-hero, it’s Sparrow who always keeps things interesting. “I’ll die for her!” proclaims straight-laced hero Turner; “Oh good!” responds Jack with a wicked grin. 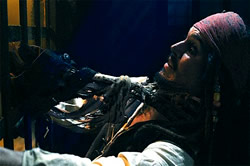 The special effects are of a high quality throughout, especially the very fluidly animated skeletons (will avoid giving too much away here) that appear just as the story seems to become dull. However, they never really feel groundbreaking in the same way as Gollum last year, but then in comparison to this summer’s Hulk, there’s no comparison. They manage to be suitably scary without becoming too comically cartoonish.

Pirates does fail perhaps from being a touch overlong. The pace does begin to drag in the final third, although it has a tidy conclusion. Largely it is the fighting sequences that eventually become a let-down, because although they are adequately choreographed, once it becomes apparent that the pirates will not die, any efforts to battle them seems a rather pointless affair and takes the tension out of these sequences since we know how they must inevitably end. Nonetheless, there are some impressive displays of cinematic swordfighting, especially the duel between Turner and Sparrow early on.

Extravagant and sweeping, Pirates of the Caribbean is an astounding success, and nearly fulfills everything it sets out to do, falling just a little short in its tedious swordfights towards the end, its pace beginning to drag. With good performances, and beautiful cinematography it was set to be a good movie. With Depp’s sparklingly inventive performance it became a great one.