“To be yourself you have to constantly remember yourself.”

After opening with an art heist, Trance takes a sudden psychological turn that spins the entire film into one of unreliable perspective as one of the thieves struggles to remember where he stashed a stolen painting. Although this is established early on, there is rarely a way to distinguish fantasy and reality so the audience is dragged along for the ride in a passive role. That would not matter if the film had greater depth than its central conceit but none of the leads are given any character development and only Rosario Dawson has sufficient material to shine. The script is overreliant on twists to keep the viewer engaged, and the result is the inverse — we never trust that there are stakes to anything we see. The writers are able to shift audience sympathies between the characters effectively, though the voiceovers are frequently heavy-handed (“No piece of art is worth a human life”). I do enjoy films that leave aspects open to interpretation, but by the end Trance felt frustratingly inconsequential — a disappointment from a director as capable as Danny Boyle.

“You know those movies where the picture just starts to slow down… and melt? Then catch fire? Well, that’s Berlin.”

Outside of superheroes, Hollywood has struggled to provide us with compelling female-led action movies. Atomic Blonde bucks the trend, though ironically Charlize Theron’s dedicated performance crafts a coldly determined character with whom audiences may struggle to empathise. A Cold War spy thriller with graphic novel roots, the script retains the unusual ability to surprise. Told in flashbacks through an adversarial debriefing, we know that what we are shown may not be the whole truth. James McAvoy’s nihilistic, brazenly duplicitous turn as a deep cover agent is a particular highlight. 1989 Berlin is shot in cool blues infused with splashes of neon colour⁠ — it’s reminiscent of John Wick (which Leitch co-directed). Everything is familiar then, including the action (a brutal extended fight in a stairwell stands out), but this strange blend of Le Carré and John Wick is presented with a stylish boldness that demands attention.

“You like to make fun of us, but we are more powerful than you think.”

The general downward trajectory of Shyamalan’s career has made him an easy target, yet two decades on he can still attract funding and acting talent. Split is, fittingly, a psychological thriller masquerading as horror. Its setup features the abduction of three teenage girls who are subjected to the stereotypical semi-exploitative treatment of horror victims. The tone swiftly shifts as the girls discover their captor exhibits multiple personalities which becomes the movie’s focus and provides for a fresher experience. Although the closing minutes of Split demonstrate it to be a stealth sequel to an early Shyamalan success, setting up a subsequent crossover, the film stands entirely on its own. McAvoy is entertaining as he enjoys chewing through Kevin’s various colourful personalities. Sadly, the remainder of the characters are one-note horror tropes, and too much of the film relies on convention rather than subverting it. Split is Shyamalan’s best work in a long time but cannot be described as a return to his early form.

Keira Knightley always seems most comfortable in a period piece. Although centred around a romance in the 1930s, Atonement is more a story about perspective, misunderstanding and consequences. We see a pivotal scene at a fountain from two perspectives, allowing us to appreciate how it was misconstrued by a child. Joe Wright’s camerawork allows the audience inside characters’ heads, used most notably in a sprawling six-minute long take on the Dunkirk beach. The film’s conclusion feels slightly rushed but still maintains the book’s tragic reveal, an ending that will undoubtedly be off-putting to some but should be little surprise for an adaptation of an Ian McEwan novel. 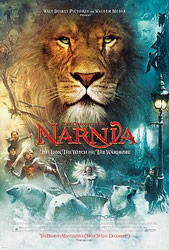 I have intentionally not re-read the book prior to viewing the film as I wished to experience it anew, while hoping for the story to rekindle the same emotions it had as a child. As comparisons with Peter Jackson’s Lord of the Rings are inevitable I shall not shy away from them but would offer as a warning that this is a very different film and a viewer who approaches it with the same expectations will be sorely disappointed. Equally, though it be a magical children’s story, it is something vastly predating Harry Potter and bears little resemblance below the surface. Rather it is something of a hybrid, epic children’s fantasy, in a way that will only truly become evident if the franchise does extend to further films (all seven books have been optioned, although The Horse and His Boy seems an unlikely candidate for a film).

The four Pevensie children, Lucy [Georgie Henley], Edmund [Skandar Keynes], Peter [William Moseley] and Susan [Anna Popplewell], are evacuated from London during WWII. They find themselves in a large stately home belonging to a reclusive professor [Jim Broadbent]. While exploring they discover a mysterious wardrobe that leads them into the magical world of Narnia. While marvelling at the wonderous creatures they soon discover, much to their surprise, their coming has been foretold signalling the end of the battle between the evil White Witch and Aslan, Narnia’s true king. 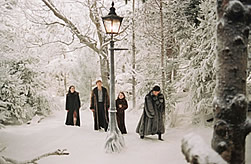 Given several television adaptations it is easy to regard this film as somewhat redundant. However, the impressive production values and Weta’s involvement in bringing the creatures to life makes this a much easier world in which to lose oneself. Nevertheless one must still approach it with an open childlike imagination in order to experience its full effect. It remains very true to C.S. Lewis’ book in both style and content. Although changes are evident, the Biblical imagery, particularly that embodied in Aslan, remains both intact and prominent.

The children’s performances are all decent, if not particularly noteworthy. Georgie Henley’s open-mouthed awe avoids being overly cutesie, while Peter and Edmund’s brotherly fighting seems a little rigid. In short you won’t find yourself cringing as in the first Potter instalment, nor will you be blown away. The secondary actors fare better, particularly James McAvoy as Mr. Tumnus, the fawn. Liam Neeson voices Aslan with sufficient gravitas, but the majestic lion still seems a little subdued in the film, perhaps because we see him from an outside perspective, rather than through the children’s feelings as in the book. Equally the witch, though suitably manipulative and chilling, seems to be lacking in presence. 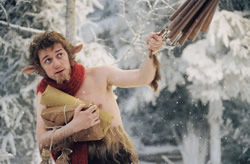 Narnia itself feels less expansive than I would have liked, perhaps due to the lack of the lingering, sweeping panoramic shots of The Fellowship of the Ring. Despite this, it feels inherently magical from the first moment Lucy scrambles into its snow-covered forest. The soundtrack provides an enchanting accompaniment in the first half, becoming somewhat more routine further in. The battle sequences showcase Weta’s work with polar bear-drawn chariots and dozens of centaurs charging into battle. These are not the dark clashes of LOTR, however, but rather the epic fantasy battles of a child’s imagination with shining armour and bloodless swords.

Shots like the lamppost ground it well for those familiar with the book, while others may feel there are too many unanswered questions, such as Aslan’s disappearance and the witch’s origins. It is important to remember that these remained mysteries in the book too, answered only in the penultimate instalment, the prequel The Magician’s Nephew. This highlights that the faithful adaptation from the book is both its strength and its weakness.