The Holiday lulled me into a false sense of security with its subjectively shot opening that perfectly captures the self-inflicted pain of unrequited love (albeit leaning on an explanatory voiceover rather than trusting the audience). From there, it falls into the predictable rhythms of Anglo-American romantic drama, with a weak script elevated by a good cast. Amanda and Graham’s relationship is the most compelling as it is given sufficient time to blossom, though it is difficult to empathise with Cameron Diaz’s Amanda after she physically assaults her ex during their breakup and never seems at all heartbroken. Kate Winslet’s disarmingly vulnerable performance as Iris is the film’s strongest, but with her time divided between the colleague she is escaping and an elderly retired screenwriter she befriends in LA, we never spend long enough to become invested in her relationship with Miles, despite the film running long at well over two hours. In truth, The Holiday is no more (or less) a Christmas movie than Die Hard, simply being set at that time of year. As a breakup movie, I can certainly see its appeal, showing its leads ultimately move on with minimal effort, simply by virtue of physical distance and encounters with pleasant strangers.

“Why does everybody keep dropping from the sky?”

Where Welcome to the Jungle felt unexpectedly fresh, its sequel feels like a safe cash-in. As a direct sequel, The Next Level finds some additional mileage in the formula by mixing up the now university-age characters inhabiting the various videogame avatars, as well as throwing in two old folks for good measure. The most fun to be had is in Dwayne Johnson’s impersonation of Danny DeVito, replacing his adolescent awkwardness in the previous film with an irascible lack of awareness. At nearly two hours, The Next Level overstays its welcome despite some energetic action set-pieces. The premise remains frequently fun but weaker character arcs provide limited depth and what should feel wildly exotic feels disappointingly familiar.

QuickView: Jumanji: Welcome to the Jungle (2017)

“It’s a lot easier to be brave when you’ve got lives to spare. It’s a lot harder when you only have one life.”

When Jumanji was first announced, I expected a lazy nostalgia cash-in. It was a pleasant surprise to find a thoughtful and fresh take on the jungle adventure. Although boardgames are now in vogue once more, a shrewd move is for the original movie’s cursed game to transforms itself into a 90s console cartridge before being discovered in the present day by four schoolkids in detention. The use of outdated 90s videogame tropes as characters, inhabited by the minds of these children, allows for smartly written conflict and self-discovery. The highlight is undoubtedly Jack Black’s performance as a phone-obsessed teenage girl, whilst Dwayne Johnson ably undercuts his own typical charismatic presence with a believable lack of self-confidence. Meanwhile, intentionally clunky 90s videogame exposition and level structure keeps the pace swift in this fun comedy-adventure. 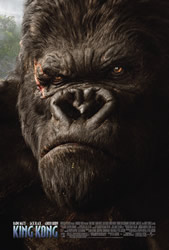 In completing King Kong Jackson both fulfilled a childhood dream and showed just how valuable a well-timed remake can be, even if the original is as iconic a masterpiece as this. Another combination of Andy Serkis’ acting skills with Weta technology, we are granted an utterly real Kong, visually rather than just by drawing us into the fantasy world as with the previous films.

We follow struggling actress Ann Darrow [Naomi Watts] as she meets the untrustworthy filmmaker Carl Denham [Jack Black]. Pursued by creditors, he hires her as the lead for his picture, setting sail for the undiscovered Skull Island by following a map he has received. Scriptwriter Jack Driscoll [Adrien Brody] has also been tricked into joining them for the voyage. Once they reach the mysterious island, Ann is captured by the natives and offered to Kong, a gigantic ape. The ship’s crew mount a rescue mission across this prehistoric world to save Darrow and escape. 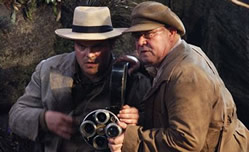 Most will tell you that at over three hours the film is excessively long: it is not Lord of the Rings. However they will disagree over what should be cut. Over an hour is spent on establishment before we even see the beast, and Jackson delves into the backstories of all our characters. Although a proper understanding of Darrow and Denham’s motives is key, the history of the ship’s crew is somewhat unnecessary. Once the action begins, however, it is utterly riveting. It is any action adventure afficionado’s dream with man versus giant insects, man versus dinosaur, dinosaur versus Kong, and of course, man versus Kong. Skull Island’s creatures are phenomenal, peaking with a ten minute brawl between Kong and three tyranosaurs. For this alone, it is must-see on the big screen.

I cannot understand why Jackson, in the position to select any actor he pleased, took the risk of casting Jack Black. Whether it was a calculated gamble or blind luck I cannot tell, but despite being no fan of Black’s prior acting performances, here his straight performance has a caged intensity which perfectly captures the essence of Denham. Watts does well as Darrow, giving depth to her role and creating brilliant chemistry with a non-existent creature as she displays believable affection for Kong. Having Serkis on set must have aided this greatly. Her relationship with Kong is two-way, following the 1976 telling rather than the 1933 (incidentally for those who worry about continuity and such things, this incarnation of Kong is about 25 feet tall). Brody is an unlikely choice as the action hero and fares somewhat less well. Although he plays the scriptwriter role well, he’s often unconvincing later in the film. One remains incredulous that he could lead Darrow back across the island virtually unharmed when a band of well-armed sailors suffered so many casualties.

The weakest portion of the film is probably the return to New York City. Although one of the finest special effects is this historical recreation, once Kong breaks loose we have the army called in when the ostensible body count is virtually zero. The closing lines are a horrible and rather abrupt end to a poignant demise. I suspect a director’s cut may alter this closing scene. The scenes which absolutely cannot be cut, and indeed it is doubtful could be improved upon, are the intimate moments between Darrow and Kong. Shots of them watching a sunset together and her dancing for him are astounding in both their beauty and sincere simplicity. The human expressions etched upon Kong’s face will remain with the viewer long after the movie ends.

Jackson has crafted a magnificent version of this tale, although it perhaps falls short of becoming the definitive version. However, for those introduced through this movie it will be difficult to rewatch the older incarnations because the visual standard is simply so high. This is certainly Kong for the current generation and creating a more believable and emotionally captivating Kong on film may well be impossible.