“This is London. Someone has died in every room in every building and on every street corner in the city.”

Edgar Wright’s London-based ghost story lavishly conjures Soho in the 1960s but serves as a deliberately stark warning against romanticising bygone eras, exposing coercive mistreatment of women beneath the glossy facade drenched in neon light. We see the entire film through the perspective of Eloise, a modern-day fashion student who experiences visions of the past through mirrors. These reflections provide the film’s best visual flourishes, achieved predominantly through practical sleight of hand and clever choreography (particularly a stunning dance sequence in an exquisite recreation of Café de Paris with repeated Texas Switches, a favourite of Wright). Eloise’s attempt to reinvent herself at university mirrors her visions of Sandie’s grasp at stardom in the 60s . This is communicated through sound design and colour as Eloise crosses to experience Sandie’s world, the coldly desaturated indifference of London suddenly giving way to the vibrant 1960s, with front audio bursting into Dolby Atmos surround. Anya Taylor-Joy is mesmerising, her singing voice adding to her talents. There is also something about former Doctor Who stars twisting their charm into something darker, Matt Smith’s manipulative Jack reminiscent of David Tennant’s Purple Man in Jessica Jones. The horror elements work more through atmosphere than jump scares (though there are some), coupled with Eloise’s concerns about her own mental state. Unfortunately, although the third act reveals are largley satisfying, Last Night in Soho becomes less than it could be when confined to the present day and more conventional horror visuals.

Disclosure: I know personally at least one person involved in the making of this film. 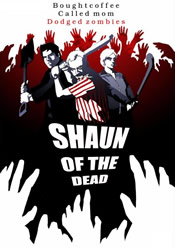 I found the idea that a single film could singlehandedly resurrect (for want of a better word) the flailing genre of distinctive British comedy to be frankly laughable (for want of a better word). But that is exactly what intelligent and original RomZomCom (that’s Romantic Zombie Comedy) Shaun of the Dead has managed to achieve, through the basic premise of questioning whether or not you’d actually notice if your neighbours turned into flesh-devouring zombies…

Shaun [Simon Pegg] is a 29-year-old who is shuffling through life in a dead-end job, sharing a house with flatmates who hate one another, and generally spending an inordinate amount of time in his local, The Winchester. When his girlfriend Liz [Kate Ashfield] dumps him, Shaun could be forgiven for being a little distracted, failing to notice those around him have become zombies until one attempts to bite a chunk right out of his arm. With best friend Ed [Nick Frost] he devises a plan to rescue his mum and Liz then barricade themselves inside the only safe and familiar place…the pub. 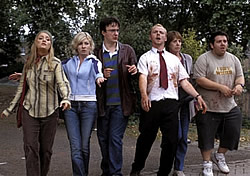 The comedy aspect of the film is filled with always amusing and often hilariously bizarre circumstances and solutions from the intrepid heroes, most notably an attempt to pass unnoticed through a horde of zombies by acting undead, and another sequence in which Shaun and Ed debate which vinyl records are suitable projectile weapons. For the horror fans, the second half won’t disappoint either as the film becomes successively gorier with each zombie attack, featuring the expected impalings, decapitations, and even stomachs torn open by hungry zombies with some particularly gut-churning special effects. Nonetheless, amidst the comedy, the carnage is all quite enjoyable – if a little disturbing – for those who are not used to such things. Shaun‘s romantic side does not fare quite so well, largely due to the fact it isn’t granted enough screen time in comparison to the previous elements. It develops as a plot device to begin with, and is subsequently largely ignored until the closing scene.

Fans of the show will be pleased to know that Shaun of the Dead often feels like an extended episode of Spaced (another Wright/Pegg collaboration) but manages to avoid the usual TV-to-film mistakes. It retains the fast-paced style and uses a similar method of referencing other sources to good effect. To keep the genre geeks happy on the zombie side are numerous nods to Romero’s Dawn of the Dead (and in fact Shaun‘s zombies are more faithful in their staggering shuffle than the recent Hollywood remake) as well as more recent examples like 28 Days Later, with a cheeky aside about “rage-infected monkeys”. But it pays homage to a wide range of unrelated sources too, such as the sudden jump cuts used to portray characters getting their personal fixes (generally tea), a technique used in Requiem for a Dream. 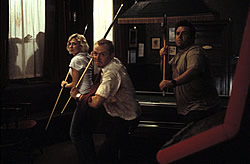 Pegg is perfect as the “everyman” thrown in at the deep end of an apocalypse, managing to create a likably disoriented and inept character. Frost’s Ed is in the running for worst possible flatmate, but again retains a likable and amusing charm despite his selfish laziness. The supporting cast are all seasoned British comedy TV veterans from the likes of The Office and Black Books, allowing for a brilliant cameo sequence where they meet another bunch of survivors, comprising of their TV-partners.

The editing keeps the pace moving well, although it is slightly disappointing that things do degenerate into rather old hat zombie survival fodder in the closing scenes. Nonetheless, choreographing a zombie battle to a Queen soundtrack is simply inspired, and must be seen to be believed. Arguably bordering on oversentimental at times, Shaun of the Dead remains almost always both refreshingly original and intelligently hilarious, allowing us to forgive the sidelining of the undeveloped romantic side of the story. The potent cocktail of horror and comedy with a wonderfully British spark hits the mark every time, and the special effects never look low-budget to boot. So with its deeper message about the way we do often stagger obliviously through life in zombie-like fashion, there’s not much more one could ask for in the very first RomZomCom.