“It’s a dangerous thing to mistake speaking without thought for speaking the truth.”

Knives Out was a delightful surprise that absolutely did not require a sequel, so I approached Netflix’s acquistion of the rights to multiple further movies with some trepidation. The prepostrously accented detective Benoit Blanc is the only returning character, Daniel Craig clearly continuing to enjoy himself in a less physically demanding role. No time is wasted in establishing the conceit, a group of influencers and disruptors receiving elaborate invitations from a tech billionaire to an island party, providing ample fodder for further satire of the wealthy and feckless. If Knives Out was Rian Johnson remixing the traditional elements of a whodunit, with Glass Onion he instead subverts the structure entirely, resolving one mystery midway through the proceedings and then rewinding so that we see events unfold with more information and an entirely new perspective. Johnson once again assembles an excellent ensemble cast, though Janelle Monáe is the standout. Events may unfold on a sun-drenched island rather than in an ominous mansion, but returning cinematographer Steve Yedlin provides visual continuity along with the similarly meticulous mise-en-scène, some of which is sadly lost on the small screen (Glass Onion recieved only a one week limited theatrical release in order to qualify for awards). Establishing the form’s return, this is the third high profile whodunit of 2022, following Death on the Nile and See How They Run — of the three Glass Onion is by far the most ambitious and the most successful.

“Harder to tell the good from the bad, the villains from the heroes these days.”

Typically the Bond films of each actor to take on the role end in a downward trajectory, but the inconsistent films of Daniel Craig’s tenure have culminated in perhaps the best swansong for a Bond actor to date, even if it sits firmly in the middle of the pack when it compared to Craig’s previous outings. Bond is at its best when it reinvents itself and, as I have previously opined, it arguably has less to do with the actor than the direction. Cary Fukunaga’s languid pacing and sombre tone suits the more personal story — even its opening swaps the usual kinetic action for a flashback horror sequence with an endangered child. No Time To Die is considerably too long at 163 minutes, featuring plenty of striking locations but little memorable action (aside from an early car chase and a tense woodland hunt). Ana de Armas brings the most energy to the film, though her presence is sadly restricted to one self-contained sequence. There has been an organic character arc through the Craig era from Bond proving himself in Casino Royale to the seasoned professional in Skyfall and now the introspective retired agent recognising that the politics behind espionage have become increasingly grey. A long-promised and overdue shift in this final outing is the greater depth to the female operatives and to Bond’s relationships. Conversely, Safin is one of the weakest Bond villains to date (through no fault of Rami Malek) and the franchise’s continued reliance on facial disfigurement as a shorthand for “villain” — with three examples in this film alone — is a tired anachronism. No Time To Die may not be Bond at its best, but the franchise continues to mature in a fitting send-off to its most human incarnation.

Knives Out is Rian Johnson’s modern remix of the classic whodunnit. The traditional elements are present: a deceased patriarch, a squabbling family with secrets and a large mansion with plenty of space for intrigue. Whilst Johnson’s love for the genre is evident, he highlights some of its contrivances like the idiosyncratic civilian detective inexplicably given free rein to investigate. As in his debut, Brick, the language often jars with the modern setting, but his flair for dialogue makes it fit this specific world. Unusually our viewpoint is not that of the sleuth (Daniel Craig with a distracting Southern drawl) but rather the deceased’s nurse, Ana de Armas wonderfully portraying both vulnerability and determination. The ensemble cast is delightful, deriving humour largely from the absurd, although its sporadic placement results in a slightly uneven tone. The mystery itself is expertly plotted over the course of two hours which rapidly fly by, and some secrets remain until late in the proceedings without a sense of cheating. The result is far superior to the recent adaptation of Murder on the Orient Express. The height of praise for this sort of film is that — even where I could anticipate certain elements — watching them unfold remained entertaining. With its eccentric characters, stylised dialogue and constrained setting, Knives Out feels theatrical rather than cinematic, but that should not diminish one’s enjoyment whatsoever.

The first thing you should know about us is… we have people everywhere.

Despite clocking it at around half an hour shorter than any of the recent Bond films, Quantum of Solace actually proves one of the most exhausting to view, feeling like a single protracted action sequence in which the adrenaline never really lets up. The downside is that neither the story nor characters are given a chance to breathe. Given the scant fragments of the former that is perhaps not an issue, but the latter leaves this film an underwhelming experience.

Picking up shortly after the end of Casino Royale, Bond [Daniel Craig] and M [Judi Dench] interrogate Mr. White, revealing an organisation called Quantum who blackmailed Vesper. Still motivated by revenge for her betrayal and death, Bond cuts a swathe of destruction as he hunts down Dominic Greene [Mathieu Amalric] who is buying up land to control the most important natural resources. Meanwhile Bond meets Camille [Olga Kurylenko], a woman with her own vendetta and a useful ally as a rogue Bond must keep ahead of the CIA, terrorists and even MI6.

It is telling that the film opens on car chase already in progress, but perhaps its style is moreso. The action direction leaves much to be desired, featuring a lot of lazily edited quick cuts that serve to confuse the viewer rather than let them enjoy the events. I thought we were beyond that. Some is clearly borrowed from Bourne, but adequately reproduced such as a lift escape scene. The noteworthy exception is a fight through a glass ceiling onto scaffolding which is expertly choreographed with a great tracking shot as they fall. This moment of brilliance ends up standing out since it is sadly not repeated.

Such is perhaps the trouble with a franchise that replaces its director each film. By contrast the cast, returning and new, are all impressive. Craig’s Bond will continue to delight all those who enjoyed him in Casino Royale, effortlessly cool with suppressed rage while his tense chemistry with M remains as compelling as ever. Unfortunately what arguably made the last film so compelling was character development in Bond, but since it had the entire arc, there was really none left. Olga Kurylenko does well in providing another strong Bond girl and could have filled this gap had she been given the time to do so. Meanwhile the villains felt surprisingly flat this time round. Real perhaps, but decidedly uninteresting.

One emerges with the sense this is the middle instalment of a trilogy — the plot already set up and largely action heavy — although those involved refuse to comment. The truth is that the relentless pacing actually fits the plot rather well, with Bond on a rampage of revenge while everyone else is after him. The problem is that the result is just not very Bond. There is more to a Bond film than simply action, and in failing to deliver that, Quantum feels untrue to the franchise in a way that Casino Royale, while a reboot in style and tone, never did. 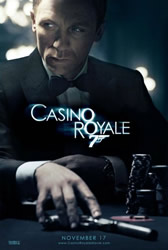 The selection of Daniel Craig as the new Bond sparked an outcry at the idea of this blonde-haired, blue-eyed Bond. I was a vocal supporter having seen him carry Layer Cake and later his memorable supporting role in Munich. Now I expect even his most ardent critics to be floored by the transformation Bond has undergone in arguably his best incarnation yet.

Going back to his roots, we see in black and white the two kills that promoted Bond [Daniel Craig] to 00 status. M [Judi Dench] is clearly worried about his early promotion and arrogant recklessness, storming an embassy. On the heels of terrorist financier Le Chiffre, the banker is backed into a corner once Bond foils his attempt to blow up a plane. Gambling with his clients’ money, Le Chiffre is left with no choice but to win it back in a poker game at Casino Royale in Montenegro. Bond joins in, with the Treasury’s investment being watched by the alluring Vesper Lynd [Eva Green]. 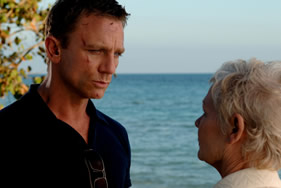 Comparison can be drawn with the return to the Dark Knight’s roots in Batman Begins. Similarly the tone shifts to a darker, more gritty world. The action sequences are far more gripping for the simple reason that in contrast to the old clean, almost clinical, violence, now when Bond fights he gets hurt. After killing two men in a stairwell his white shirt is drenched crimson with blood, in later scenes we see his face scarred from earlier fights. The film pushes its 12A rating with two uncomfortably protracted strangulation scenes.

This is not to say the kinetic, unbelievable action set pieces, the staple of the Bond experience, have gone. Indeed it opens with a highly memorable le parkour free running chase through a building site. There are no car chases, although they do destroy a beautiful Aston Martin DBS. In its new-found realism gone too are the gadgets and Cleese’s Q, as well as Moneypenny. Much of the overt comedy is stripped away as a result although the subtler humour remains. The only link to the past is in Dench’s M and she is superb. She never tries to outshine Bond but her calm, staid composure is the perfect complement. As for Campbell’s direction, it has become quite clear that he certainly knows how to introduce a new Bond — he was, after all, the man behind Brosnan’s arrival in Goldeneye. 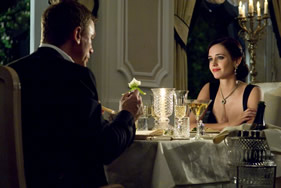 The villains are all competent yet standard. However Green provides one of the most fascinating bond girls to date. She is required to combine verve and depth in her character as well as luscious good looks, and she pulls it off fantastically. Verbally sparring with Bond, she is a refreshing change from vacuous tedium of the average “love” interest. She is also the pivotal point for Bond’s shifting character as we see Bond emerge from a shell and mature in this film. As he stares into the camera with those incredibly bold blue eyes at the end, telling us his name, we know he will be back and could not be happier.