Bullet Train is a Tarantino-esque crime story that unfolds within the confines of a single train, populated by an ensemble cast of colourful assasins in the vein of John Wick. The ensemble cast excels in bringing these thinly sketched assassins to life, undermined only by some very dubious accents. Central to this is Brad Pitt’s charmingly hapless hitman-in-therapy, though Bryan Tyree Henry and Joey King are likely to be the most memorable. David Leitch’s action credentials are beyond reproach, having spent several decades as a stunt performer and coordinator (including as Pitt’s stunt double) before turning to direction with John Wick. He was apparently reluctant to direct this project because of the constraints in choreographing action confined in a train, but those restrictions can also breed creativity as we have seen previously in Snowpiercer and Train to Busan ⁠— such is the case with Bullet Train, and there is little sense of repetition in the kinetic hyperviolence until very late in the proceedings. The neon visuals of Leitch’s spy thriller Atomic Blonde also fit more naturally into the Japanese setting. The final element to holding the audience’s attention is the twisting story that gradually links the backstories of these assassins as they hurtle toward an ominous final stop in Kyoto. Along with Everything Everywhere All At Once, 2022 seems to be a welcome return for franchise-free action films and, in a quiet summer less dominated by superhero movies, hopefully Bullet Train will find the audience it deserves.

“I do what I do because of my dad. He was a hero. He gave his life for the pursuit of knowledge. Because up there is where our story is going to be told.”

Ad Astra (literally “to the stars”) is the kind of slow and thoughtful science fiction, grounded in reality and exploring themes of humanity, that takes time to percolate after the credits roll. It lies somewhere between Moon, with a gradually emerging mystery, and Gravity, with most of its peril coming from the very real dangers of space. Despite its scale, spanning the solar system, Ad Astra is a supremely personal story and Pitt acts largely with his eyes, his focused steady gaze as the unflappable astronaut gradually giving way to doubt. He is driven to discover what became of his father’s pioneering mission to Neptune and we see in both men how heroic determination leads to an unscientific need to be right, but it is in shedding those ideas of cold masculinity and accepting the fragility of his isolation that Roy emerges a far stronger figure than his father.

Set in the late 1960s, as Hollywood’s heydey is already drawing to a close, it is easy to see washed-up actor Rick Dalton as a vehicle for Tarantino’s anxiety about his own continuing relevance. The interwoven tapestry of stories combines real and fictional characters, allowing Tarantino to revel in the filmmaking process and insert his characters into classic movies. The introduction of Sharon Tate is intended to cast a shadow over the story and Tarantino deftly fills an extended sequence at the Manson family’s ranch with a sense of unease and dread, but he also makes a conscious decision to assume knowledge on the part of the audience. I suspect Tate’s story plays far better in the USA (where the Manson family murders are deeply ingrained in the public consciousness) than elsewhere in the world. Once Upon A Time‘s alternate reality is telegraphed early when a stuntman played by Brad Pitt bests Bruce Lee in a fight. Some may view this as disrespectful but Tarantino is obviously a fan of Lee and the entire point is the ridiculousness of this outcome. It leaves the audience guessing at how Tarantino will treat Tate’s brutal murder, particularly given Inglourious Basterds‘ loose adherence to historic fact. Although staples like chapter headings are gone, Tarantino still gets in his own way. Multiple foot shots break the immersion, feeling perfunctory and self-indulgent, and — as with The Hateful Eight — the most irritating tool is an out-of-place single-use voiceover, deployed here to summarise the events of a six-month time jump, all of which could have been communicated effectively on screen instead. Ultimately this is as much a languid movie for film lovers as it is for Tarantino fans — his ninth film sits solidly in the middle of his catalogue but, for a director appearing to question his relevance, that is no small feat.

“Any other team wins the World Series, good for them. They’re drinking champagne, they get a ring. But if we win, on our budget, with this team… we’ll have changed the game. And that’s what I want. I want it to mean something.”

Billy Beane, General Manager of Oakland Athletic, bucks tradition by adopting statistical analysis to identify undervalued players to fill his team’s roster on a limited budget. Despite being based on a true story, we are given relatively little insight into the statistical philosophy behind “Moneyball”. There is plenty here to enjoy for those uninterested in baseball, but it is clearly designed to resonate more with fans of the game, with significant time dedicated to reliving Oakland Athletic’s winning streak. The film then meanders, uncertain how to conclude, and feels overlong as a result. 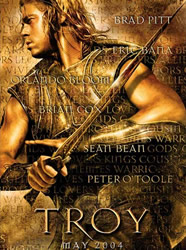 Loosely based on Homer’s Illiad, the intended appeal of Peterson’s film is clear from the cast of tanned, toned male leads. Resplendent with armies of impressive proportions and a decently (as in good, certainly not modest!) designed classical costumes and armour, visually Troy is certainly satisfying. However, as yet another film that openly attempts to earn the title of “epic”, it often struggles to reach the status it believes it holds.

Much liberty has been taken with the source material, although the basic story remains. Lovestruck Trojan Prince Paris [Orlando Bloom] steals away the Spartan Queen Helen [Diane Kruger] at a peace summit. Dismaying his noble brother Hector [Eric Bana], and enraging the Spartan King Menelaus [Brendan Gleeson], Paris’ childish and thoughtless actions spark off this legendry war between the kingdoms of Troy and Sparta, as Menelaus sends a vast armada including the reknowned hero Achilles [Brad Pitt].

The most notable change is the removal of the constant intervention of the Olmypian gods in this tale. This decision to remove the mythological element in its entirity is jarring at first, but still a valid one as it opens up the humanity of the characters. We still see crucial things such as the temple of Apollo, Achilles’ armour, his mother Thetis, and his death through a wound to the heel. Yet the significance of these elements may only be apparent to those already familiar with the story. 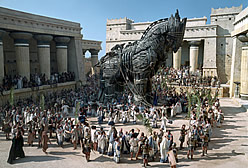 Peterson importantly does not take sides in his portrayal of each side. Whilst individual characters are often rather one-dimensional, the armies as a whole are given depth. Menelaus is a clear war-monger (with an interestingly Bush-esque rant at one point) while Achilles is here not for the fight but rather seeking glory in a materialistic sense. Meanwhile the Trojan side is split between Paris’ selfishness and his brother’s clear nobility. The only truly noble characters would be Hector and his father, King Priam of Troy [Peter O’Toole].

The numerous skirmishes and battles outside Troy are neatly choreographed but generally lack a real sense of energy. The first shots of the computer-generated armada are breathtaking, but large-scale CG battles of this sort have been seen before. This is never as compelling as the comparable fights in the recent third installment of the Lord of the Rings trilogy. The individual duels are far more engaging, however, especially those involving Achilles. Pitt trained with swordsman named Steven Ho and the resulting efficiently minimalist, elegantly calculated swordplay is a joy to watch, and the antithesis of overblown kung-fu showdowns. The problem, however, is that we have the occassional bizarrely unrealistic moments as clashing armies pauses mid-battle to become an impromptu specatating crowd for a fight between two leads. Further, the pace does drag once the armies breach the city, as the battle is pretty much over. 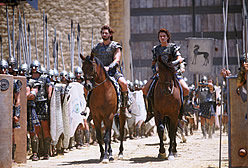 There are some great performances here, notably Bana as the noble but troubled Hector and O’Toole’s grave Priam. Sean Bean makes a delightful appearance as the likably roguish Odysseus, and Pitt does display much of Achilles angsty arrogance in his hunt for eternal glory. Unfortunately his role is marred by a camera that attempts to capture far more of his body than talent. The writers’ attempt to “humanise” him through a newly added romance with Brisies is largely unconvincing. Further problems rise with Bloom who really has yet to turn in a solid dramatic performance, and here he seems rather too much of a whinging coward for us to understand why Helen would leave with him in the first place (put simply, his performance lacks the balance breadth of the others). Kruger adds little to Helen, but one supposes her role is essentially just to look pretty which she does well enough, if not in any striking way.

Troy is both energetic and engaging to watch, but while capturing such an epic battle may require its duration of 165 minutes, it varies widely in its ability to maintain the audience’s interest as many sequences stumble to TV-historic-drama level, while the battle scenes are often tired and lacking in any real originality. It never truly feels as epic as it tries to suggest, and in part the choice to remove the mythological aspect was a double-edged sword as it also removes the wider notions of destiny guiding the lives of these men and armies. However, the highlights are certainly worth the effort, with some genuinely impressive performances, costumes and, above all, the uniquely ruthless swordplay of Pitt’s Achilles.