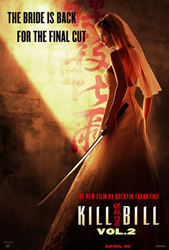 After a noir-esque recap of her previous outing, The Bride [Uma Thurman] returns to cross the last three names off her list. We are first shown a flashback to the wedding rehearsal at which we have already seen her gunned down by her former assassin colleagues, as well as glimpse into her training under the tutelage of Pai Mei [Gordon Liu]. She then takes on the seemingly resigned Budd [Michael Madsen], and one-eyed Elle Driver [Daryl Hannah] before finally confronting her former love Bill [David Carradine] and discovering the existence of the daughter she never knew survived.

The change in tone is immediately clear in this character and dialogue driven sequel. A casual conversation between Thurman and Carradine outside the chapel is filled with indescribable tension because we already know what follows. Tarantino crafts arguably his best surreally tense comic moment in a bristling scene in which Thurman attempts to talk over an assassin hired to kill her, soon after discovering she is pregnant. 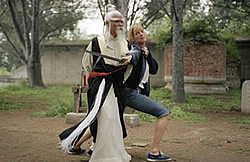 Tarantino’s directorial flair again pervades this film as he makes some masterful transitions that occassionally border on pretentious, except that for the most part they work. Again we are treated to black and white passages, in one of which Uma Thurman’s white clothes make her appear to glow. The aspect ratio shifts to 1.33:1 with questionable purpose for one sequence, while another fight utilises a split-screen. He’s certainly showing off but the variety is satisfying. The most impressively original two-minute scene occurs in total darkness with a superbly chilling use of surround sound that feels positively claustrophobic even in a large cinema.

The performances all hold much greater depth than its predecessor. Thurman especially is now able to show a much greater range as we see her emotional capacity and a hidden regret rather than just a woman on a hell-bent mission of revenge. Carradine is masterful as the smooth-talking villain and his charismatic attitude of calm coolness works far better than the alternative typically hammy revenge villain. Combined with Tarantino’s easily flowing down-to-earth dialogue he becomes one of the most accessible psychopathic mass-murderering kingpins. In contrast, Gordon Liu has great fun in lampooning his 1000-year-old kung-fu master stereotype Pai Mei with incredibly humorous results (by far the best ever overuse of facial hair as a prop!), although those familiar with this character staple from martial arts movies will undoubtedly appreciate this more. 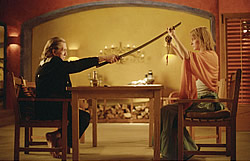 The action is still strong when it occurs, although for the most part it is far more restrained. Budd takes longer to dispatch than both we and The Bride expect, while her showy swordfight with Elle (both now armed with Hatori Hanzo-crafted katanas) tears straight through the walls of a trailer home, ending in typically grizzly Tarantino fashion. In contrast, the eventual showdown with Bill is largely a war of words, careful, precise and rivetingly tense. The inevitable fight is short and sudden (they swing their swords while still seated) and almost poetic in its conclusion.

For all its visual dexterity, Volume 2 remains overlong, often granting excessive screentime to unimportant secondary characers who tend to lack colour. It flows poorly at times, jumping disjointedly (although not quite disorientingly) from one point to another. There are a few serious plot flaws too, such as quite how such a brilliant ex-assassin still fails to take out her victims cleanly, when they have such an apparently easy time outwitting her. Sure, they know she’s coming, but then she knows they know too. Further the expected background on just why the other DiVAS hate her so much never quite emerges. Why should Elle care that she is made to “suffer to her last breath”? Tarantino seems not realise just how gaping these holes appear when the rest of this installment is so astutely written.

Undoubtedly the two Kill Bill films will polarise audiences, many of whom will love the stylish action of the first and hate the slower pace of the second, while others (and especially, it would seem, many critics) will praise the second having been disappointed with the first. The fact remains, however, that the full scope and vision of Tarantino’s modern revenge saga is only evident when the two films are viewed together. Put simply, Tarantino needed to make some harsher editorial choices, removing the unnecessary extraneous material rather than stubbornly hanging on to every last shot. The resulting streamlined single film would have been the part-homage and yet uniquely original masterpiece he came so close to creating, while instead he has just created two very, very good films.