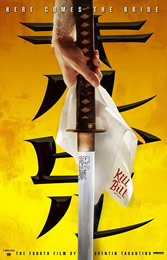 Kill Bill is without doubt one of the most stylishly executed films I have ever seen. No less than six years after his previous outing, Jackie Brown, Quentin Tarantino finally returns to direct his fourth film. The pressure after his previous three monumental films must have been immense, and he finally decided to turn to a favourite genre of his, kung-fu “exploitation” movies. In Kill Bill he embraces the heart of the genre and crafts what is both a tribute and also unique, original, and utterly Tarantino. Although this is a marked departure from his history, it looked as though fans were to be served a treat once more.

The Bride [Uma Thurman], who’s name is beeped out whenever mentioned in order to heighten her anonymity, seeks revenge on her former partners, a highly skilled team of assassins, after they attempt to kill her when she decides to leave and settle down. Killing the entire wedding party, it is Bill [David Carradine] himself, her former employer and lover, who shoots her. But she survives, and waking from a coma four years later, she has a list of five names to cross off one by one, starting with Oren Ishii [Lucy Liu], who has risen as a Tokyo underworld boss.

Kill Bill is a gory film, always to excess, but it cannot be faulted on this point as it never pretends to be anything less. Unlike comparable fight sequences in films like The Matrix, where long sparring sessions tend to be clean, enemies dispatched with little blood, here we are granted a far more realistic world where fights hurt. But by raising the level of gore even further, to almost unrealistic heights, Tarantino is trying to convince the viewer to look further than the blood to what lies beneath the violence. And when such carnage is juxtaposed by the incredible beauty of the scene in a snowy Japanese tea garden, Tarantino shines. 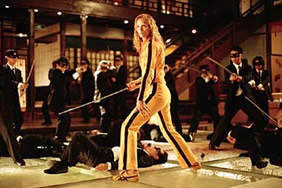 Tarantino’s directorial flair pervades the film throughout, with numerous stylistic variations. The stark black and white opening is so powerful that I would be doing it a disservice to describe it here, but to continue the film in such a fashion, would have rendered it unwatchable. Instead vibrant colour is restored as the Bride embarks on her quest for revenge. Then Oren Ishii is introduced, and her (rather bloody) history is shown through a short anime cartoon sequence. This unique storytelling device seems out of place at first, but fits the Kill Bill well, especially as the excessively gory fight sequences that follow seem more akin to the anime style than traditional cinema. Then during a key fight with Ishii’s bodyguards, the colour is dropped for stark black and white once more which causes blood to spurt bright white and stain dark black (although this move was more to evade the censors – the Japanese release may remain in full colour). Fight over, The Bride blinks, and colour returns suddenly. Lights off, and we are granted a classy fight between silhouetted figures, dropping one by one. One by one, Tarantino reworks standard imagery to make it very much his own.

The characters are more humanly depicted than in old Hong Kong cinema. Uma Thurman perfectly captures The Bride’s vengeful emotion, encapsulated in her desperate sobs as she realises, moments after waking from her coma, that she has lost her baby. Thurman is not the obvious choice for a role like this, but she performs admirably and brings a depth to her character that isn’t offered through the script. She doesn’t want to do this, but she has no choice. This is again evident in the scene with “Copperhead” [Vivica A. Fox] where neither woman wishes to fight, and their situation is even more strained once her young daughter interrupts them, arriving home from school. Lucy Liu’s casting as Oren Ishii is excellent, both beautiful and ruthlessly deadly. Her outburst before the other crime bosses, and sombre apology during the final fight sequence are incredibly powerful. 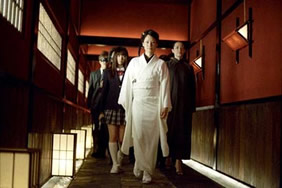 Unlike Tarantino’s previous films that relied heavily on their continuous stream of witty dialogue and clever banter, Kill Bill focuses on the action. The script is one of Tarantino’s weaker efforts, although his flair still comes through in a sushi bar scene with Sonny Chiba. The pop-culture references are still there, as Oren chides The Bride, “silly rabbit…” and the pair finish together, “trix are for kids.” But there simply isn’t as much depth below the surface on the violence here as in his many other scripts.

While it is understandable that many would not wish to sit through three hours of such extreme violent action, the film does suffer from its separation into two “volumes” in terms of pacing. The serious action in Volume 1 is confined to the closing third, and there are many slow (although never quite dull) periods before the House of Blue Leaves. I cannot help but feel that the two halves combined might seem more balanced. Occasionally Tarantino’s directorial quirks get the better of him. The chapter headings, for example, break the flow of the film and generally seem rather meaningless given that the story is told out of sequence anyway. But then who except “cool geek” Tarantino could open a kung fu film with a Star Trek reference?

So Kill Bill is an incredibly stylish slice of cinema with awesome action sequences and genuine originality combined with the homage it pays (regularly) to its predecessors and source material. However, while this is more than enough to satiate any Tarantino or action fan, the script here just doesn’t quite reach the level of perfection that Tarantino has previously proved himself capable of… time and time again. But do watch this film, and be quite certain that you will be back again next year for Volume 2. Oh, and while you’re at it, don’t forget to pick up the soundtrack which is another Tarantino scorcher!