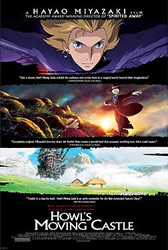 As visually stunning as its predecessors, Howl’s Moving Castle disappointingly fails to deliver the same compelling storytelling alongside Miyazaki’s signature surrealism. While there are some wonderfully lighthearted and breathtaking moments, the overly long film trips over its nonsensical plot, rapidly losing focus after a tight first act.

Set in what appears to be a late Victorian Europe (apparently a popular period location for recent anime), coupled with rather westernised animation for the opening, the story follows a young girl named Sophie who is cursed with rapid aging by a witch. She becomes a cleaner for the enigmatic wizard Howl, living inside his mobile castle finding a new family with this strange set of magical beings.

The castle itself is the real attraction: an incredibly detailed and vividly realised cobbled-together palace with turrets and annexed rooms jutting out almost at random to create an organic abode for Howl. Calcifer, the fire spirit which acts as the life force of the house and bears more than a passing resemblance to Aladdin‘s Genie, is both the most fun and most consistent of the main characters. Howl, for example, constantly speaks out against the raging war, refusing to get involved, while every night he leaves to…involve himself. This could have been used to display an internal struggle but rather it appears to show war as unleashing an inner beast even within good men, while leaving Howl seeming shallow rather than conflicted.

Meanwhile Sophie, having had an aging spell cast upon her by the rather arbitrary Witch of the Waste (one of many undeveloped Wizard of Oz references), constantly shifts in appearance. It is uncertain as to whether this is intended to display her own self-awareness, her emotion, Howl’s perception of her, or simply that of those around her based on her actions. It may simply be Miyazaki’s representation of the constantly changing nature of the individual, regardless of age. The problem is that the film uses too much unexplained imagery, even in smaller elements such as the bearded disguise the boy Markl uses in town.

The sudden ending is bizarrely contrived and it’s impossible to tell whether that was the film makers’ intention or they had simply let the obtuse plot run so far away from them that they did not know how to tie up the unravelling ends. It certainly had the audience laughing (perhaps for the wrong reasons) and will leave you both bemused and bewildered. If you are already a fan of Miyazaki’s work then there is much to enjoy here. If not, however, this is not a great introduction to his delightful worlds. Nevertheless it stands as clear proof that the lacklustre results of the latest in-house Disney animated offerings were not due to the traditional animation style’s age, but merely a lack of originality and imagination which Miyazaki’s vision retains in spades.

Charlie and the Chocolate Factory (2005)