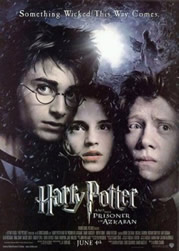 With a new director at the helm, the third installment of the Harry Potter series is adapted from the longest of the books thus far, and yet has the shortest running time. These changes result in a more streamlined movie that marks a serious step up as the boy wizard franchise graduates from kids’ fare to serious film.

Sirius Black [Gary Oldman] has escaped from Azkaban Prison and is headed for Hogwarts. Harry [Daniel Radcliffe] soon discovers that Black was a close friend of his murdered parents, and is believed to be the one who betrayed them to Lord Voldemort. With Hogwarts school under guard by Azkaban’s Dementors, Harry, Ron [Rupert Grint] and Hermione [Emma Watson] must unravel the mystery of Sirius Black as Harry’s life appears to be in grave danger…

People will say that under Cuarón this is the darkest of the three movies. While this is true, the change is also due to the stylistic change in tone of the third book, making it a good time for a directorial switch. While Cuarón is now known for his recent darkly humourous road-trip movie, Y Tu Mama Tambien, he is no stranger to children’s cinema, having directed the 1995 remake of A Little Princess. Here he weaves together atmosphere from both to create a more mature product than the previous two installments. His greatest skill is in crafting a far more realistic world by keeping the camera moving and circling around characters and sets, where Chris Columbus tended to keep it still. Using a palette of less vivid colours and shooting his leads in casual clothes rather than the familiar school robes creates a stage that is closer to reality, and somehow more disconcertingly weird as a result. Atmospherically, he is spot on. 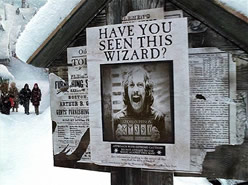 The performances of the main cast of child actors has improved considerably. Their maturing performances make their emotions far more believable and their dialogue does not seem as strained as before. The same cannot be said, however, of some of the smaller roles, which now stand out more strongly as a result. Watching Oldman and Thewlis (as new teacher Professor Lupin) are a delight to watch. The franchise’s strength lies to no small degree in its ability to attract such strong talent, and they are able to make average dialogue flow with flair. My only gripe regarding Lupin is really with Rowling’s writing. I just wish she had been a little less pretentiously self-indulgent in naming him, for it took me preceisely two-and-a-half seconds from his introduction to guess his true nature (having not read the book). But this is not, however, a fault of the film. Michael Gambon steps in as headmaster Dumbledore, replacing the the late Richard Harris so deftly that those unaware of the change may well miss it. Finally, this film’s extended sequences with divination Professor Trelawney [Emma Thompson] were undoubtedly energetic but for the most part served only to irritate me. 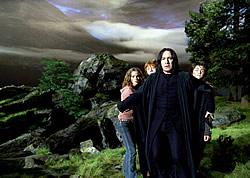 Azkaban is blessed with wonderful special effects which are also integrated with more subtlety than before. The most impressive is undoubtedly the Hippogriff, a fusion of horse and eagle, which is lifelike not only in its feathered appearance, but also in its fluid movements which are both equine and birdlike in equal measures. Beyond this, it also conveys thought and emotion through its facial expressions and stance. The Dementors are very reminiscent of The Lord of the Rings‘ Ringwraiths, but are a creepy presence throughout. Especially well captured by Cuarón is the visual interpretation of their ability to drain happiness from their victims.

Although the pacing is generally tight, it does still lull occassionally, making Azkaban still feel overlong like its predecessors. The time-jumping is handled well, if in somewhat routine fashion, but serves well bearing in mind that younger viewers must be able to follow it easily, and it should provide some discussion for them afterwards. Character development is limited here, with little other than a tentative, if predictable, start to a possible romance between Hermione and Ron. It should be noted that both Harry and Hermione do come across as much stronger characters in this film, especially in Hermione’s confrontation with Draco. The problem is that Draco now seems so weak that it’s difficult find him intimidating at all, let alone understand why others would follow his lead.

Still suffering from a few flaws of its predecessors, Harry Potter and the Prisoner of Azkaban marks a real progression for the series, and highlights the difference that can be achieved through the interpretation of a new director. Maturing performances from its equally maturing young cast aid the final result, making it far and away the best yet, and promising more enjoyable fun in the coming films.