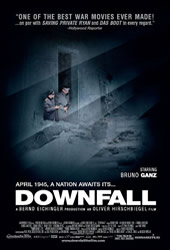 The first internationally released German film to focus on Hitler, Downfall (or “The Downfall” to accurately translate the German title Der Untergang) focuses on the last days not only of the Führer, but of the entire German people, a nation awaiting its inevitable defeat. It ranks amongst the greatest World War Two films in its portrayal of a broken Berlin and particularly in Ganz’ powerhouse performance as the crumbling dictator.

Hirschbiegel approaches his subject with painstaking accuracy, the story largely developed from two sources: Joachim Fest’s Inside Hitler’s Bunker and the memoirs of Traudl Junge. Through eyes of secretary Traudl Junge, the Führer is introduced as a kindly grandfather figure, suggesting a hugely sympathetic portrayal of the man. Nothing could be further from the truth. Whilst Ganz phenomenally nuanced performance has pathos in his shaking hands and often lost daze behind his eyes, he also rants and raves at his generals like a madman, ordering non-existent armies to attack the Soviet lines and cursing the loyal German people for failing him. The mixed approach is subtler than that to which we are used, yet it makes his evil more chillingly real. 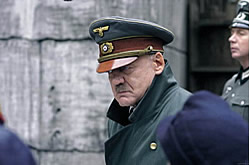 The film’s most chilling scene is not Ganz’s however, but Corinna Harfouch as the wife of the psychotically loyal Joseph Goebbels. Rather than let her children grow up in a future without national socialism, she elects to kill them instead, forcibly drugging them and then cracking cynaide pills in their mouths. As she moves from one to the next, her conviction is the scariest part of this film. To have heard these same children sing a patriotic German folksong to “Uncle Hitler” earlier on makes it considerably more moving. Truly that is what made Hitler so dangerous: the unquestioning devotion which he inspired in others. 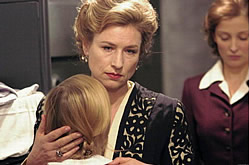 Unlike the average war film, Downfall begins at the end, once defeat is imminent. Its palette of greys paint a gritty, ghostly burnt-out husk of Berlin and the unrelenting pounding of explosions act as a subliminal drain on the viewer, flinching at each near miss. Most of the film’s scenes occur within Hitler’s bunker, with a small cast of his closest generals and aides, evoking a claustrophobia strongly reminiscent of Wolfgang Peterson’s U-boat epic Das Boot. The bunker-mentality is both shocking and incredibly compelling viewing. Eva Braun seems at times on the verge of madness, while the others drink their way to oblivion to avoid accepting their that they are hopelessly trapped.

Perhaps it’s weakest choice was is the central use of Junge, disproportionately increasing her significance. She is clearly intended as a way in for the viewer and an impartial eye through which we can appreciate Hitler’s more vulnerable side. However, her willful naïvity swiftly makes her less accessible and her devotion to Hitler becomes unfathomable, distancing us from our supposed way in. Nevertheless one cannot help but be drawn in by the plight of both the city of Berlin and those caught up around Hitler, struggling to hold onto something, be it a futile hope of victory or merely determination to die rather than surrender.