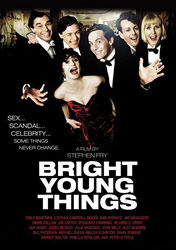 The multitalented and delightfully witty Stephen Fry turns his hand to directing with this glamorous debut adapted from Evelyn Waugh’s “Vile Bodies”. Bright Young Things is both filled with and satirising the excess and eccentricity of celebrity culture in the early 30s.

Aspiring author Adam Symes [Stephen Campbell Moore] is returning to England with the manuscript for his novel, “Bright Young Things”, and has an arrangement with publisher Lord Monomark [Dan Aykroyd] that will provide him with enough money to marry Nina Blout [Emily Mortimer], also from an aristocratic family fallen on hard times. But the wedding is off after an over-zealous customs officer confiscates the “obscene” material, leaving Adam struggling to find the money to win back his girl.

Fry’s cast of bright young actors show much more talented depth than the characters they portray; Cambell Moore (who interestingly bears a striking resemblance to a young Hugh Laurie) is remarkably accomplished for an actor in his first feature, while Michael Sheen is wonderfully camp and Mortimer manages to tenderly portray a rather unsympathetic character. This is all aided by the Fry’s reworking of Waugh’s material, for where Waugh is clearly repulsed by and vilifies his hedonistic characters, Fry seems rather endeared to them and it is to his credit that he does not simply portray them as spoilt brats, eliciting some wonderful performances from his young cast. 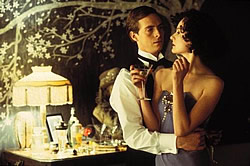 The love triangle is a rather flimsy plot for the film, which really wishes to indulge in a dazzling display of decadence among the upper class of the time. This sort of visual extravaganza works brilliantly in the opening “Inferno” party, but it cannot maintain this sort of intensity. As a first-time director, Fry seems so desparate not to bore his audience that at times he flies along too swiftly, flitting between scenes with little sense or rhythm, which gives the movie an episodic feel that seems almost better suited to a televised drama serial.

While this little world is wonderfully recreated with impeccable set design (most notably Adam’s hotel and Nina’s apartment), the film begins to suffer from being too long since the story is secondary and the characters are never really developed. Fry suddenly feels the need for the delightful frivolities to turn starkly serious in a rather jarring style (especially Agatha’s descent without warning into madness), making these changes reek of script contrivance. Fry then seems to fall back on cliché sentimentality as we are expected to sympathise for characters that may have been endearing, but were always rather superficial. 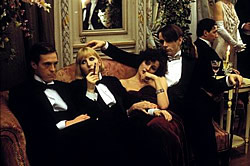 Like Roger Avery’s (more successful) time-shift with the Bret Easton Ellis novel Rules of Attraction, Fry has brought Waugh’s novel forward from late 1920s to late 1930s. This allows him the rather heavy handed use of the war and Nazi Germany to darken the tone of events, but this was obviously not what Waugh had in mind with his writing in 1931.

This film has certainly shown Stephen Fry’s eye for depicting affluent excess with painstaking period detail, conjuring (and for the most part sustaining) an incredibly lively atmosphere as well as his skill with gentle satire, so it will be certainly interesting to see where his next directorial outing takes him. As for Bright Young Things, it is an enjoyable whirlwind ride through the delirious glamour it portrays, but much like its characters, can all too often seem devoid of any real depth or substance below the surface. But then, in a strange way, that’s really sort of the point.