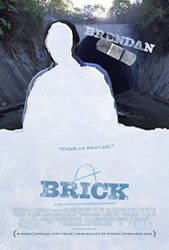 This year’s first truly inventive film arrives with little flourish but plenty of style. Rian Johnson’s directorial début moves classic noir into a high school environment in what would be a gimmick if it were about visual appearances, but is instead about heart.

After receiving a frightened phone call from an ex-girlfriend, Brendan [Joseph Gordon-Levitt] enters the local underworld to shake things up and search for answers. With everything unfamiliar, his only friend is The Brain [Matt O’Leary] who feeds him information while he tries to track her down along a path that introduces him to a shady drug-dealing kingpin [Lukas Haas], hot-headed thugs, and femme fatales. Once murder enters the equation, he knows he is in too deep, but is determined not to stop until he discovers the truth. 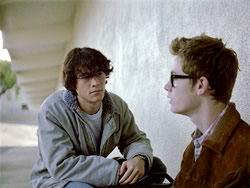 The noir translates jarringly at first to its new setting. Unconvincing teenage characters shoot the sharp dialogue of the 1940’s, but the strength of the delivery of this world will soon draw you in. Visually Johnson doesn’t go the way of Kiss Kiss Bang Bang but instead uses a subtler technique, draining colours in some areas and adding vibrancy in others. Our hero Brendan wears an old grey jacket with glasses and an unruly mop of curly hair rather than the traditional hero’s sharp get-up, but this serves to make him more accessible to us.

The plot is suitably convoluted and certainly unpredictable, yet not the film’s memorable aspect. Rather it is the feeling that permeates the entire experience, strangely aided by how out of place these teenage criminals seem. Gordon-Levitt offers another strong turn as an outsider, but unlike Mysterious Skin his attraction here is from his passionate, single-minded focus rather than sexual presence. His intensity allows much of the dialogue to work, warning back stoned thugs with an improbable, “I’ve got all five senses and I slept last night, that puts me six up on the lot of you.” Unfortunately the rapid delivery of the dialogue is occasionally swallowed by poor sound recording, a shame since the script has been crafted with such care. Haas conversely lacks the screen presence to make The Pin as powerful a character as it ought to be. Even in a teenage world he lacks the requisite presence despite his brooding cloak-and-cane image. 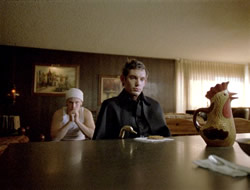 The fusion allows the school administration to become another presence of authority, usually provided by the police, as Brendan’s vice-principal reminds him, “You’ve helped this office out before.” The school itself has no character and is greyed out, perhaps intentionally to avoid it becoming a focal point. However when the students’ underworld are delicately balanced with their normal lives, it seems odd that the school plays so small a role. Perhaps it serves to highlight that it is in the gritty outside world that these youths truly live.

Ultimately what appears to be a gimmick and never quite rings true is in some ways the whole point of the film. These are teenagers, in way over their heads and utterly unreal, and yet they represent exactly what being a teenager feels like, the constant fear that everything is a matter of life and death. In the world of Brick, how it feels is what makes it breathe.