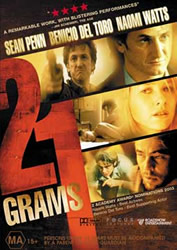 The title 21 Grams is a conceptual gimmick taken from a wistful and vague voice-over at the end of the movie which shows the film makers didn’t really know how to open or close this otherwise powerful film about the crushing weight of guilt and power of redemption.

21 Grams follows three characters whose lives and fates will become entwined by a series of events. Paul Rivers [Sean Penn] is in desperate need of a heart transplant, his fragile marriage held together only by his terminal illness as his wife wishes to have his child through artificial insemination. Jack Jordan [Benicio Del Toro] is an ex-convict who has since devoted his life to Christ. But behind his religious fervour, his old self often appears to be hiding just below the surface. Christine Peck [Naomi Watts] is happily married with two daughters, but events send her life spiralling back into the drug-abusing days of her past. These three lives will crash into one another with both tragic and redemptive consequences. 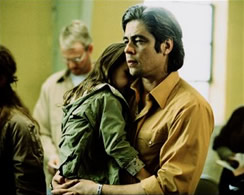 Attracting the most discussion will be the film’s non-linear structure and the response will no doubt be very mixed because 21 Grams, unlike Memento which utilised this concept to brilliant effect, has no narrative reason for its choppy and broken style. This emotionally fraught collage is almost as if a series of scenes around 2-4 minutes in length have been edited together at random. What it achieves is intriguing as the audience are forced to connect intellectually from the start, and are hypersensetive to the images filling the screen, needing to pick up on small details to figure out where they are in the narrative.

However 21 Grams eventually becomes too fractured for its own good. While piecing together the puzzle is engaging at first, it eventually becomes distracting. Some particularly harsh cuts feel almost exploitative as we jerk suddenly from tense gunfire to a steamy sex scene. Because time jumps occur so erratically, we cannot feel these characters evolving emotionally. Had the technique been used as a method of introducing the characters through small incidents or perhaps as a way of slowly unravelling the converging events after the car accident (the same device Iñárritu used in Amores Perros), the effect would have served a more specific purpose and allowed the rest of the film to flow more naturally. By sustaining it for the entirity of the film, it becomes draining on the viewer and ultimately detracts from the movie’s intentions and the stellar performances. 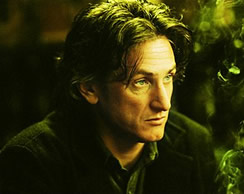 Where 21 Grams really shines is in the incredible performances by all its leading cast. Naomi Watts captures the destructive internal chaos after a traumatic event that leads her character back to drugs and alcohol as she struggles to cope with her loss. While it occassionally appears as if she has been asked to perform an extended version of her Mulholland Drive meltdown, she pushes herself to extremes without seeming to overact when she screams. Benicio Del Toro plays the typically moody and intense character he is known for, but in portraying Jack’s crisis of faith he shines brilliantly. His religious beliefs always seem sincere, not hypocritical. Yet we also see how his fervour threatens to overtake him at times, such as when attempting to discipline his family at the dinner table. Later, his guilt-laden expression speaks volumes of the internal anguish that utterly consumes him. And Sean Penn offers an incredibly powerful yet far more understated performance than these two, subdued in the guilt that he is only alive because another man had to die in order to provide him with a heart, which causes him to reevaluate the things in his life.

The dark and grainy film quality combined with a sombre soundtrack all fits Iñárritu’s brooding intent. However, the film deals with redemption as well as despair which crafts something ultimately more optimistic. The cast all turn in magnificent performances but the overly fractured narrative structure that is engaging at first, ultimately detracts from the power of these involving character portrayals.